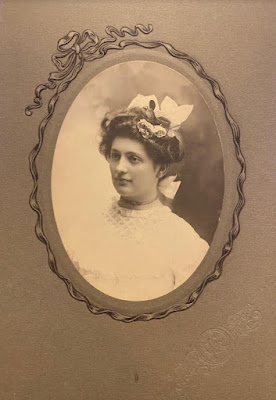 This photograph was taken circa 1902 or 1903 at the Bedford photographic studio of G.C. Acker. He was active in Bedford Iowa from at least 1901 through about 1907. Nelle was a friend or classmate of Florence Ream who is known to have attended Bedford High School from 1901 to 1904, so Nelle probably was there during the same time period.

Census records show this family was residing at the nearby town of Ross in 1900, and within the Bedford city limits in 1910.

Nelle appears on the 1920 Census in Portland Oregon where she works as a teacher, and boards with another teacher named Bertha Irwin (or Irvin).

I am not certain where Walter worked, but I presume the abbreviation in the Census is some sort of Novelty Company. Nelle was a teacher at the Ockley Green School.

The 1932 obituary for Nelle's father Taylor Jones mentions that he died of stroke, and his death was the first in his rather large family. His wife and all eight children survive him.

Nelle's husband Walter died in 1952. He seems to have been quite an interesting fellow. His obituary is at left. He was a member of several lodges including Knights Templar. He played a musical instrument (saxophone) and knew magic tricks.

It appears that he and Nelle had no children. Nelle's brief funeral notice in 1975 states "she is survived by several nieces and nephews". However, she married rather late in life (age 38) so may have never planned for children.

It may be possible to track down some of her nephews and nieces, and their offspring, to find a taker for this old photograph. I will work on that.