The hand-writing on back clearly says "J???IE L. HOLBROOK" but someone has written a price over the first name, partially obscuring the second, third and fourth letters. I can make out that the second letter could easily be an E. The third and fourth look more than anything else like a pair of U's. I have often seen penmanship in which a lower-case "n" looks like a "u", so I am presuming this photo is labeled "Jennie L. Holbrook."

The little girl appears to be around 5 years of age. The fashion, hair, and type of mat-frame suggest a time period around 1900 or very soon thereafter. This would indicate a girl born around 1895 to 1896.

I have found a "Jennie L. Holbrook" on the 1900 Census for Massachusetts in the town of Douglas, which is a neighboring community to Webster (where the photo was taken).

NOTE - this census reports that this is a second marriage for both parents.

Mother Louise Silence Taft-Southwick was previously married to Ira Southwick, and had two small children who both died in 1889. So Jennie had two half-siblings she never knew.

Jennie graduated from Simmons College in 1917 (the year her father died), and went to war in 1918, serving in the navy in the capacity of Yeoman First Class. 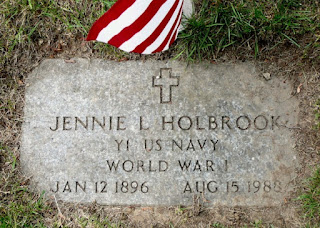 Jennie died 15 August 1988 and is buried next to her parents at Pine Grove Cemetery in Worcester County. She apparently never married and had no children. But I may be able to find descendants of her brother Edward. 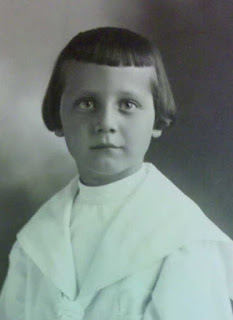 This image of Edward Silas Holbrook was found on a tree at Ancestry.com. I DO NOT HAVE THIS PHOTO, but I show it here for comparison. Other than the hairstyle, he is a dead-ringer for his sister Jennie. Also the image of Edward is said to have been found at an antique store in Springfield Oregon (which is precisely where I found the photograph of Jennie.) It is the discovery of this image of Edward that convinces me that I have correctly identified Jennie.

I will continue to research Edwards line.