This photo was located at an antique fair in Stuart, Florida.

The photo was taken around 1890 at a photographic studio in New Britain, Connecticut. The subject appears to be in her early to mid-30's, so likely born around 1855-1860.

On the back, it is labeled "Mrs. Justin Case."

The photo has faded a bit, but I have boosted the contrast before posting it here.

The city directory for New Britain Connecticut for the year 1889 includes a listing for Justin L. Case. He was a lockmaker at the R&E Manufacturing Company. In the 1892 Directory he is listed as a locksmith.

Justin Case appears on the 1870 census as an 18-yr-old, thus born about 1852, living at home with his mother Lamina Lucretia Case,  along with a possible older brother or uncle named Cromwell O. Case, age 24. There is also Justin's aunt Mary Hays in the household. In that year, relationship to the head of the household was not recorded, but Mary continues to live with this family and is identified in later years as Justin's aunt.

The 1900 Census indicates that Justin was born in Connecticut in October 1851. His wife Annie was born in England in June 1855. Son Marcus W. was born in July 1883 and daughter Elsie Elizabeth was born in September 1884. Also there is Justin's aunt Mary Hays and a nurse May Daly.

UPDATE - a distant relative of Annie tells me that Elsie later married a carpenter named Grover Goodridge and died in 1961, apparently without issue. Justin's son Marcus William Case married a widow and may not have left any children of his own.

The 1910 Census shows Justin, now 58 years old, and still employed as a lockmaker at the same company.

In Febuary 1917, Justin L. Case filled out a required Military Census form and supplied the following information. He had served 3 years as an infantry private in the C.N.G. (does that stand for Connecticut National Guard?) He also divulged that he had suffered a serious physical injury, specifically "rupture." 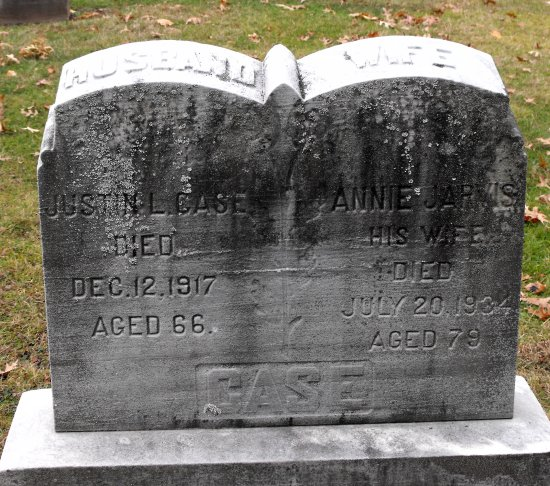 Justin Lucius Case died later that same year, on December 12, 1917. His wife Annie Jarvis, lived to the age of 77, passing in 1934. They are buried in the Fairview Cemetery in New Britain Connecticut.

UPDATE - I have just discovered that Justin Case is a first cousin of Edward Brocket who is mentioned in the "Charles & Evelyn ROWE" story below. Justin's father, Justus Marcus Case, had a sister Sarah Cordelia Case who married James Everlin Brockett in Simsbury Connecticut. Sarah and James had a son Edward Brockett, whose daughter married Charles Rowe and had son Evelyn. I should not be surprised to find that these people were related since their photos came out of the same box at the antique fair.

Posted by Kathleen at 1:31 PM No comments:

These two photos were located at the Stuart Florida Fairgrounds at a booth in the Antique Fair.

The first is labeled "Chas B. Rowe" and was taken circa 1897 at the Stoddard Photographic Studio in New Haven, Connecticut.

I estimate the young man was around 25 years of age at the time, thus an approximate birth year of 1872 is assumed.

The second photo, found in the same box of photos, is of a man holding a toddler outside in front of a house. The location is not known. The back of the photo bears the inscription: "For Mother, May 15th, 1909, Chas & Evelyn Rowe".

The child looks to be probably not over 3 years of age, therefore an approximate year of birth for the child would be around 1906 or 1907.

Ancestry.com was able to help quite a bit, once I got past my prejudices.

Having assumed the child named Evelyn was a girl, I ended up running into dead-ends in the research. Once I realized that Evelyn can also be a boy's name, I came upon a family which fit the bill perfectly.

In the 1910 Census for Simbury Connecticut, there is a farming family headed up by 55 year old Edward Brockett and his wife Caroline E. Also living at the residence are son-in-law Charles B. Rowe (age 39), daughter May (32) and grandson Evelyn (2).

By the time of the 1930 Census, Charles Rowe's wife is listed as Ethel H. and Evelyn is going by the name "E. Brocket Rowe." (Can't say that I blame him.) By the 1940 Census, he has adjusted it further to "Evans Rowe."

Armed with that information, Find-A-Grave.com was able to locate the family's headstone and fill in the remaining data. 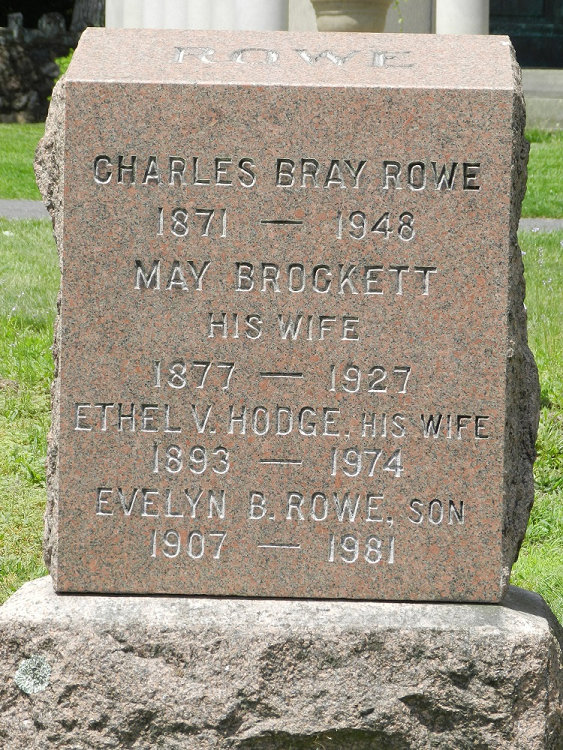 UPDATE - the people in these photographs are relatives also of "Mrs. Justin CASE" whom you can read about in the next story. These photos were acquired from the same box at the antique fair.

Posted by Kathleen at 9:33 PM No comments: