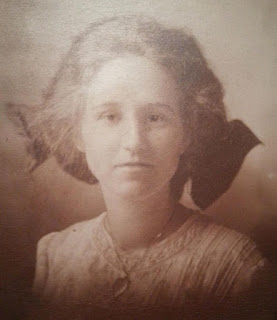 UPDATE -  this photo of Viola Wright has been claimed by her family and has gone home!

The photo was undoubtedly taken by Viola's father VanNess Wright, as the 1910 census states he was a photographer at a studio in Ellenville NY.

1930 Census shows Viola is working as a Public School Teacher in Port Jervis NY and boarding with the Francisco family on Pine Street. Also boarding there was Public School teacher Lempi Erikon whose parents were Finnish immigrants.

Viola never married, dedicating her life instead to education. She died 5 Aug 1971 in Syracuse NY. The following obit was located in the Kingston Daily Freeman (Kingston, NY) 7-Aug-1971, page 3. 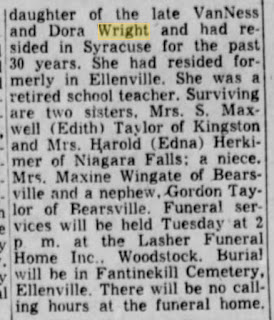 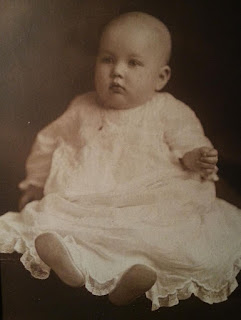 This photo was located at the Highway 127 Yard Sale last summer, in Anderson County, Kentucky.

A quick peek into Ancestry.com finds that this is Kathryn L. Prosser, born 1 Apr 1917, a daughter of William Robert Prosser and Emma Amelia Griffiths.

Kathryn died 14 Nov 2005 in Sarasota Florida at age 88. I believe that after her husband Jack passed, Kathryn went to live with either her daughter Kathy who lived in Bradenton Fl, or her son Ken Walters of Sarasota FL. 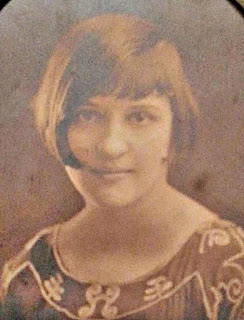 This photograph of Leah Sakulsky was located at the Palm Beach County Fairgrounds Antique Show. It is a bit pale, and I tweaked it in Photoscape to bring out more definition.

In the 1940 Census, father Barnett is shown as the proprietor of a retail grocery. 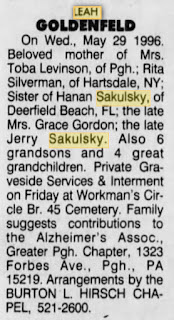 Posted by Kathleen at 1:45 PM No comments: 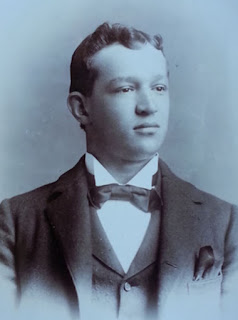 Lovely penmanship, by the way.

This photo of Edward Wenk was acquired earlier this year in Eugene, Oregon, at an antique store named Hollywood Antiques. It was located in the same booth as the framed photograph for Edith (Heller) Rothholz who was previously researched and posted below. Edith Rothholz is Edward's sister-in-law by virtue of his marriage to Lillian "Lillie" Heller.

1910 Census, Baltimore MD, Fayette Street
WENK, Edward, head, (33), butcher
WENK, Lillie, wife, (33), assistant
The census indicates they had been married 7 years, and had no children to that point.

Sometime between 1910 and 1920 his occupation changed from butcher to commercial salesman.

WWI Draft Registration 1918
Edward lists his address as 2648 Guilford Avenue, Baltimore MD, and his occupation as "Traveling Salesman" for the Frances H. Leggett Company (a wholesale grocery and goods importer). His wife is Lillie Wenk.

In 2012, his son Edward Wenk Jr. (born 1920)  died in Washington State. His obituary reveals him to have been a truly accomplished and remarkable man. http://www.legacy.com/obituaries/seattletimes/obituary.aspx?pid=158705097

Posted by Kathleen at 2:29 PM No comments: