UPDATE - this photo has been claimed by a great-grandnephew of Philip Rettig and has gone home!
This photo of Carrie and Philip Rettig was located at the Highway 127 Yard Sale in Anderson County, KY last summer.


Daughter Inez (1918-2004) married William Behrens around 1936, and had two sons James and Larry. The family was involved in an automobile crash on April 10, 1943 which killed William and son James. Inez and son Larry were both critically injured, with Larry succombing to his injuries in early May.  Inez recovered and married Robert Clady. 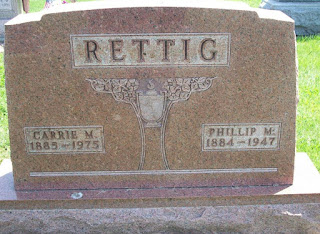 Posted by Kathleen at 1:04 PM No comments:

These two photos of Ruth and Edith Tuttle were located at the Highway 127 Yard Sale in Anderson County, KY. The photo of Ruth is in a paper cover, and is stamped with the photographer's mark with says "H.C. Grummitt, 56 Center St, Ashtabula, O." On the back of the folder are the hand-written words "Ruth Tuttle, age 4, 1910." 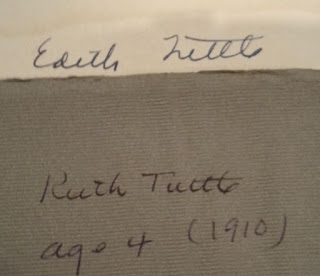 The photo of Edith is just a photograph adhered to a larger sheet of paper (and may have come out of a frame). There is no studio stamp, just the hand-written "Edith Tuttle."

I thought at first this may have said "Edith Little" but it seems to me now that it must say "Tuttle." In fact I believe the same hand wrote both names on the photos. There is simply too much similarity in the letters, particularly in the "th" of both first names, and in the "le" of both last names.

The 1920 census find the family still in Kingsville. Aunt Harriet is no longer listed, but they have taken in a niece Marie Colegrove (age 14). Father Charles lists his occupation as Vulcanizing in his own shop.

Findagrave.com shows that Charles Francis Tuttle (born 13 Feb 1867 and died 14 May 1948, a son of Duran Hugh Tuttle and Harriet Cook) was married to Carrie Emily Colegrove (1878-1943, daughter of Richard Colegrove and Sarah Jane Clark). They are buried in the Kelloggsville Cemetery.

Ruth grew to adulthood and attended Ohio State University. I find little else about her except that she died in 1987, having never married. 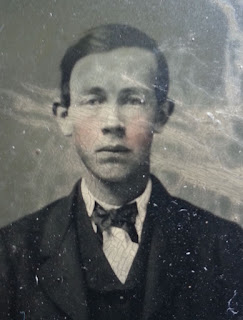 
This is a tin-type photo located at the monthly Antique show at the Palm Beach County Fairgrounds in Florida. The photo appears to be from around the Civil War era. The young man looks like he is about 20, so a projected birth year would be mid-1840s. 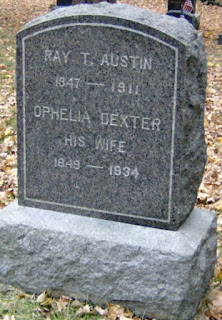 This tells us that Ray's mother's maiden name was likely VanVoris (also seen as Van Voorhis, a latter-day corruption of Van Voorhies). There was a well-known Van Voris family in Schoharie county, and there is a Van Voris Road near Richmondville, NY.

The 1900 Census for Somers lists only Ray T., Ophelia, and a boarder Charles Smith. None of the children remain in the household. We know that Mariana died in 1893, and the other children would have been grown and on their own by this time.

At the very end of 2016, I found two photos in the Pasadena Antique Gallery on Fair Oaks Avenue. There were several photos in the basket, but only these two had any sort of identification, so I bought them. Both are snapshots, so there is no knowing where the photos were taken.

I looked first for Cheryl. Using Ancestry.com I was able to locate a "Cheryl Ann Teasdall" in the California Birth Index. She was born 20 July 1944 in Los Angeles County. And the mother's maiden name was Norton.

Using Findagrave.com I was not able to locate Cheryl Teasdall, but I did find a Harry Ervin Teasdall who was born in 1918 and died May 15, 2013 in Riverside, California. His obituary was located next, and it reported that he was indeed the father of a daughter Cheryl who survived him. At that time, Cheryl was living with her husband Ernie Maulson in Temecula CA. Other survivors include Harry's wife Lucille and son William, as well as a number of grandchildren.

Harry's parents were Harry Oliver Teasdall and Ida Ervin. He had a sister named Ione. Harry's full obituary can be found here.

At the time of the 1940 Census, the Teasdall family was still mourning the loss of 18-year-old daughter Margaret Ione Teasdall who died in an auto accident 24 Nov 1939 just south of Long Beach, along with her companion Alexander Chisholm. 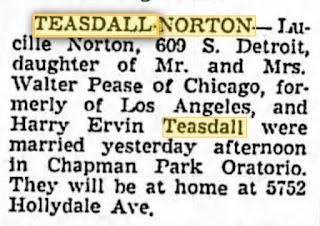 This wedding notice at right is from the Los Angeles Times, 17 May 1943.

So who was Ada Jane Norton?

ADA JANE NORTON (1921-2005), daughter of Charles Leroy Norton (1884-1924) and Hazel May Rail (1891-1924). Both parents died when Ada was around 3 years old. The memorial on Findagrave states that Roy Norton was a partner in the Norton & Chase clothing firm, and that his partner had died the day before Roy died of asphyxiation in his garage. Apparently Ada was raised by her aunt and uncle Mr/Mrs Walter Everett Pease of Lincoln NE and later of Redondo Beach CA.