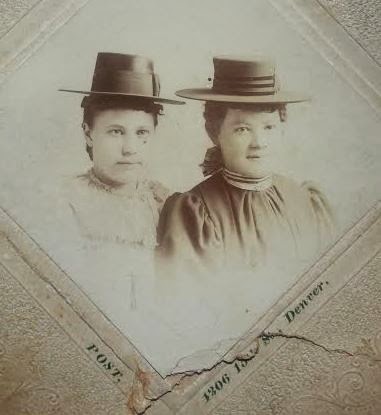 UPDATE - This photo has been claimed by a grandson of Anna Berquist, and is going home!
I am not entirely certain who is who, but based on the location of the names on the back of the photo, I surmise that the woman on the right is Anna Berquist and the woman on the left is Olivia Gummerson.


Ancestry.com has a Berquist fanily tree which shows that Charles Alfred Berquist (1874 MI - 1923 CO) was married to Anna Wilhelmina Andersson of Sweden (1880 - 1956.) She is a daughter of Karl Andersson and Christina Kajsa Andersdotter. She died 18 Dec 1956 in Grand Rapids Michigan.

Son Wesley Charles BERQUIST (1906-1976) worked as a bank clerk in Grand Rapids Michigan and married Evelyn Gertrude Sprick (daughter of Henry Sprick and Christine Pleune) in 1935. They had sons Paul and Phillip.

As for OLIVIA GUMMERSON, I am not able to find any information yet for her.

This photo of William and Emma Kemper was located at a large antique fair in West Palm Beach Florida.

The photo was taken around 1899 or 1900 in East St. Louis Illinois, but the couple apparently lived on the Missouri side of the river, as they appear in the 1900 Federal Census in St. Louis Missouri.

Here is what I have been able to glean so far, using sources like Ancestry.com and Findagrave.com.


(Note - living next door are the Tiemann family of Henry and Kate, and their 1yo son William. I wonder if this is the same William Tiemann who later married William F. Kemper's little sister Lydia who would come later [1887].)

Posted by Kathleen at 8:48 AM No comments: