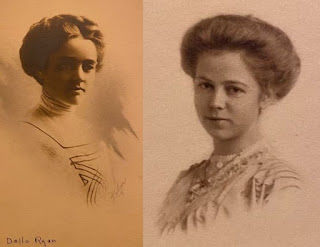 IDENTIFICATION ON PHOTO: "Della and Lenora Ryan"
PHOTO TAKEN: Ringer Studio and others, Baldwin KS, circa 1904
PURCHASED: sent to me by Ms. Kleppinger; friends of her grandmother 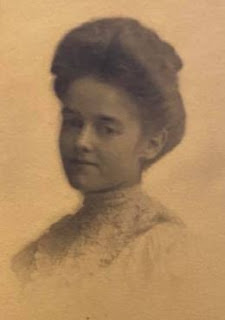 A follower of this blog recently sorted through photos left by her grandmother and found several identified ones of people not related to her family. These were her friends and classmates in the early 1900's in mostly Kansas and Iowa. Ms. Kleppinger was very generous in gifting these to me, so I could start the research on them, and hopefully re-unite some of them with their families.

A second photo of Della is shown at right.

These two lovely young ladies are known to have attended the wedding of Miss Flora Ream (my friend's grandmother) in Topeka KS in 1913.

I find these two on the 1905 Kansas State Census in Clay County. Della Ryan is 20 and Lenora Ryan is 18. 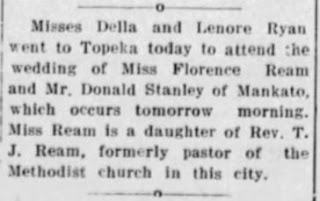 In late June 1913, the Misses Della and Lenora Ryan went to Topeka to attend the wedding of Florence Ream. Florence was a daughter of Reverend TJ Ream. I believe it is likely that the families knew each other, that Florence's father was an acquaintance of Rev. Joseph Ryan, and may explain the connection, and why Florence possessed photographs of the Ryan girls. This newspaper insert was located in the 24 June 1913 edition of the newspaper "Dispatch-Republican" of Clay Center Kansas. 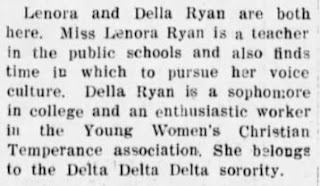 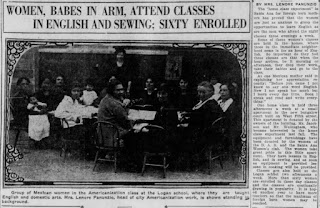 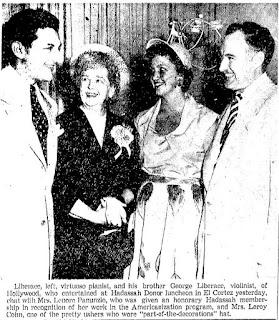 Posted by Kathleen at 8:59 AM No comments: