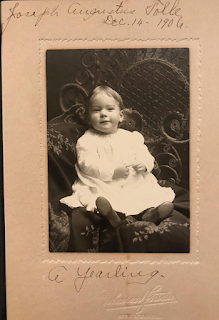 Inscription identifies the child as "A yearling" and was clearly taken on the occasion of the boy's 1st birthday. 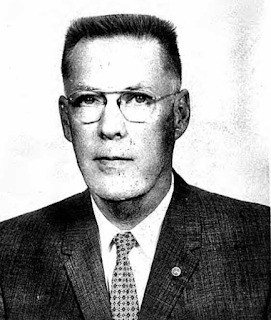 His occupation is clergyman. In 1927 he married Elizabeth Pearl Gates (1907-2010) and they had at least five children.

Ancestry.com had among its records this photograph of Joseph A. Tolle in 1960, taken from a passport or travel application. (At left, I do not possess this image and show it here for comparison purposes only).

These two photographs of OLGA TAYLOR, taken at different points in her life were both acquired at the same Antique Shop in Springfield Oregon.

The first is of a young girl around 9 years old. The inscription on the back of this photo identifies Olga Taylor, but also says "Mrs. J W Taylor, Eagleville Cal, near Mrs. Lowry" and was perhaps destined to be delivered to Mrs. J W Taylor.

She is found in the Census of 1910 with her parents.

An interesting note is that the next household on the census is the Lowry family. 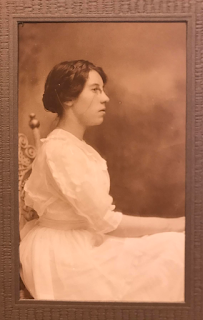 The other photograph was taken when Olga was around 17 or 18 (best guess).

Her son Paul Taylor Eschstruth (b. abt Oct 1939). In 1957, he was named National merit scholar as a student at San Jose High School.


UPDATE - From the same booth at Antiques Peddlars came these two photos which also bear the surname TAYLOR. These turn out to be Olga's siblings which are listed with her on the 1910 Census in Dewey California. 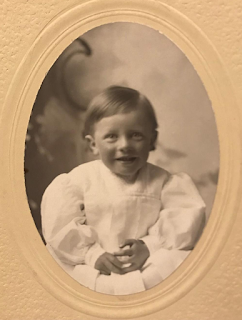 In 1940 Census for Gerlach, Washoe County, NV, he is listed with wife Dorothy (Brannon or Barron) and a daughter Gwendolyn who was born abt 1933. 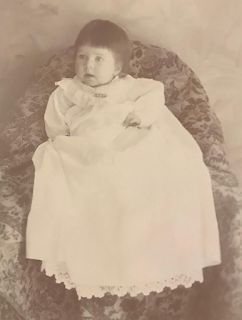 She married John James Thrasher, a native of Arkansas (1909-1956). They had a daughter named Ruth Thrasher. 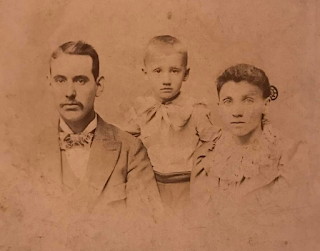 UPDATE - this photograph has been claimed by a relative and is going home!


Inscription on back: "Frank Thompson (son of Elijah and Emma Morrow Thompson), his son George and first wife Lizzie Bateman, Union township, Ross County, Ohio" then at the bottom it is signed "by Dorothy Proctor Paul, May 21, 1984"

Frank Thompson was born in Clarksburg OH, May 27, 1870. He was a farmer in Ross County OH.

His first wife, Mary Elizabeth "Lizzie" Bateman was born 17 Jan 1871, the daughter of William Bateman and Rhoda Morrison. She married Frank Thompson in Ross County OH on Oct 31, 1889, at age 19.

Lizzie died of tuberculosis on 22 Jun 1900 in Charlevoix County Michigan, where the family was living at the time. Her death certificate remarks that she was the mother of 3 children, of whom 2 survived her.

Their first child is George Morrow Thompson, who is pictured with them in the photo. He was born Aug 4 1890 in Union Township, Ross County, OH.  His sister Helen was born in June of 1899, also in Ohio. George married Pearl Hildenbrand on 11 Oct 1911 and had a son Edwin R Thompson in Oct 1914.

George and his family appear on the 1920 Federal Census. George lists his occupation as Laborer at a Tin Shop. George died fairly young at age 32, 24 Feb 1923.

After Lizzie's death in Michigan, father Frank moved his family back to Ohio, and soon re-married to Nancy Fogle (a niece of his older sister's husband.) They had at least 2 sons; Herman and Carvel.

Posted by Kathleen at 9:26 AM No comments: 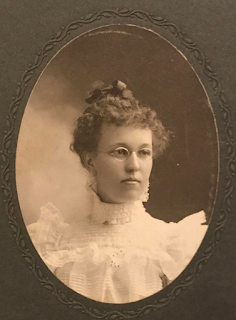 UPDATE - Lywella Thomas has been claimed and is going back home to a relative in Wales.

Inscription on back says: "To Rena with best wishes, A. Lywella Thomas" 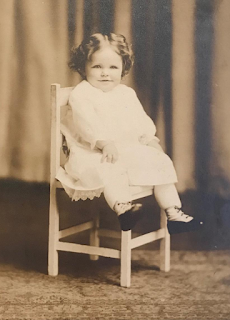 I found more than one Josephine Clark living in New Haven County, CT at around the correct time period. But I believe the correct one is this one:

Interestingly, Clifford P. Clark is a son of Halsey Steel Clark, whose photo was found at the same sale and has already been researched and sent home to a relative.

Survived at the time by her younger sister Gertrude and her family.

Posted by Kathleen at 1:51 PM No comments: 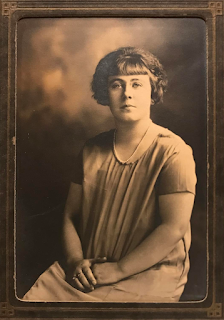 UPDATE - this photo of Gladys Cahoon as been claimed and sent home to her grandson!

This is Gladys Claire CAHOON (born in Hudson WY abt 1907) to parents Walter CAHOON and Viola HUFF.

She married Henry Walter PECK on 14 Oct 1926, and they had at least 2 daughters.

UPDATE - the above photo (Gladys) was acquired nearly two years ago. Remarkably, I stopped by the same antique mall this weekend (Jan 2020) and the first photograph I found was identified as "Grace Cahoon" who is Gladys' youngest sister, not born yet at the time of the 1920 Census.

Grace Cahoon was purchased and sent today to the grandson of Gladys who received the first photo on this post. 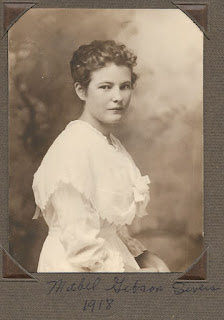 
This 1951 obituary for Mabel Ann Gibson-Severs was found: 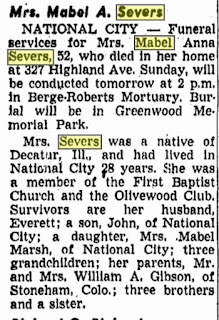 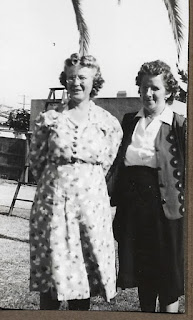 I believe Estle is the one in the dark skirt, and Mabel is in the light dress. 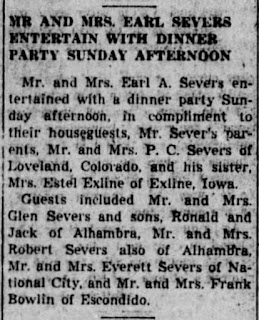 This newspaper clipping is from Escondido CA Weekly Times-Advocate in 1947 and mentions Estle Exline coming from Iowa to visit the local Severs. This may have been when the snapshot of Estle and Mabel was taken.
Posted by Kathleen at 11:36 AM No comments: 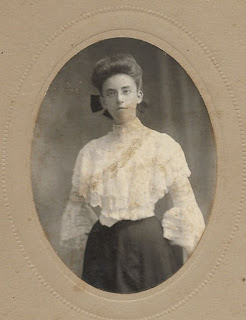 
My research finds that Eva Stull Hetrick was born 11 Jun 1889 in Trumbauersville, which is a southwest suburb of Quakertown. She appears to have lived her entire life in and around Quakertown.

She appears to be around age 17 in this photo, and it may have been a school photo for her graduating class' submissions for their yearbook.

Eva's father was a widower, Jacob Hetrick. Her mother was Leonora Stull, who died in 1908.

Her spouse was Harvey Daniel Swartz, and they had children Raymond Jacob, Harvey Jr., and Robert Charles.

1910 Census for Trumbauersville finds Eva and Harvey, and their 15 mo old son Raymond living with Eva's father Jacob Hetrick, and Eva's maternal grandmother Judie Stull. Jacob, Eva and Harvey are all employed at a cigar factory.

NOTE - this photo is a bit stained with unknown source. I have tried to gently clean it with cotton swab, but it made no difference.

Posted by Kathleen at 4:12 AM No comments:

HARSHMAN, Mamie and Chauncey (Manson IN) 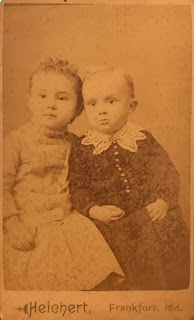 UPDATE - This photo is on its way to  Mamie's granddaughter !

Their parents were Edgar McClellan Harshman (1863-1942) and Dora Ann Payne (1865-1890). They had another sibling named Oliver Jackson Harshman in 1889. Sadly mother Dora died in November of 1890, leaving 3 very young children with their father.

Edgar remarried Nellie Mynes around 1892 and had many more children with her. 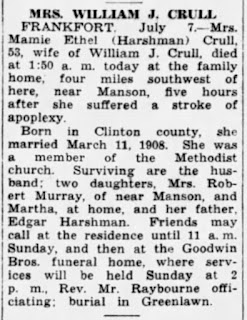 Mamie grew to adulthood and married William Jefferson CRULL (1886-1954), and produced daughters Emma and Martha. Mamie died in 1939 at age 53. 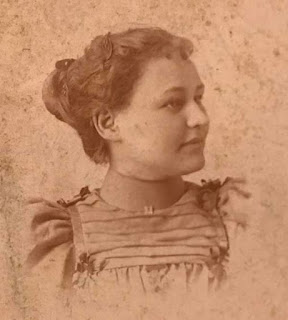 UPDATE - I have determined this is Alta Irene (Lichti) Rausch of Tuscarawas OH (1874-1948).  Here is her memorial at Find-A-Grave: https://www.findagrave.com/memorial/188505398
Alta has been sent home to her great-nephew, who has also emailed me the following images of Alta for comparison: 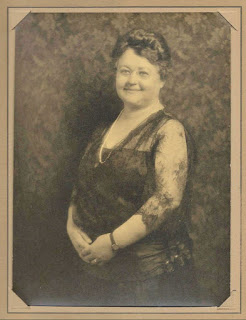 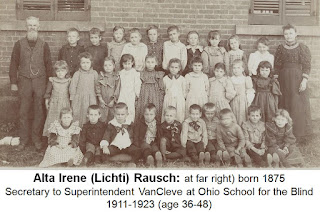