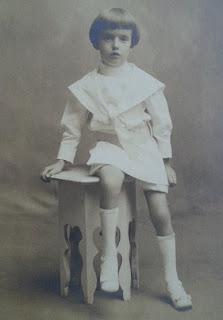 This photo, labeled "Cousin JAMES CARROLL", was found in an antique shop in Glens Falls, New York. Even if there had been no identifying marks on the back, I think I would have purchased it anyway because it is one of the most beautiful portraits I have ever seen.

The photo bears no indication of when or where it may have been taken. Based upon the young man's outfit (which makes me think of Lord Fauntleroy), I would estimate the year as being circa 1895-1904. James appears to be around 5 years old, thus placing his birth between 1890 and 1899.

Initial research shows a renowned Washington DC area doctor and medical researcher named James Carroll (1854-1907) who was an associate of Dr. Walter Reed, and was a pioneer in the effort to eradicate Yellow Fever which was having a devastating effect on the Army Corps of Engineers during the building of the Panama Canal. Dr. Carroll's eldest son was also named JAMES CARROLL (born 1889), and the photo above may be of this first-born son of the famed doctor.

A snagged portion of the full photo is given below: 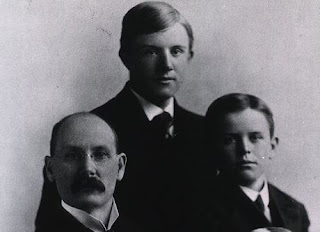 Upon close examination of the facial details of the eldest son in this photo, and those of the young man in the photo I found, I am convinced these photos are of the same individual.

If this is the correct fellow, he was born 7 Nov 1889 in McHenry, Maryland while his esteemed father was still studying at University of Maryland. His mother was Jennie M. George. By the time of the 1900 Census, the family was living in Washington DC. James married Mary Ella Rogers and had a son named Leo R. Carroll.  James died on 5 Mar 1936 in Washington DC.

Posted by Kathleen at 9:35 AM No comments: