As you can see, I have researched less than 60% of the photo collection to date.

Feel free to check my master index for the surname you are researching.

UPDATE - a descendant has purchased this photo from the Antique Gallery and James and Fannie are finally going home. This photo was located at the Stone Soup Antique Gallery in Ballston Spa NY, but since it sported a $175 price tag, I declined to purchase it. That being said, it is a lovely framed portrait with curved glass, and probably worth the price to the right buyer.

The back of the frame had two handwritten tags applied.

One identified the subjects as Fannie Pixley Sperry and James Sperry, and further identifies them as "great-great-grandfather and grandmother."

The second tag reads: "To be given to C.B. Davis, Kent School, Kent Connecticut."

Although I did not purchase the photo, I wanted any descendants I could find to be able to see the faces of their ancestors, so I snapped these photos.

Here is what I learned about the couple.

James Sperry was born in Alford Massachusetts in 1787, to parents Moses Sperry and Sally McLeod. He died in Rochester NY in March 1867. James Sperry is found in the 1866 Rochester City Directory living at 80 Exchange Street, where now one would find the arena for the Rochester Americans hockey team.

Fannie Pixley was born in Great Barrington, Massachusetts in 1788, to parents Isaac Pixley (A Revolutionary War Captain) and Abigail Hooker. She died in Rochester NY in April 1867. 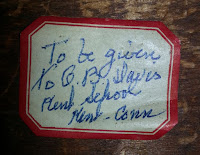 UPDATE - The THOMAS family photos have been claimed by a relative and are going home! Both photos were taken at Thomas Photographic Studio in Edmore, Michigan.

Scalloped edges on the card were typical in the early-to-mid 1890's.

At the age 22, when Charles Franklin Thomas registered for the WWI Draft, he indicated that he was married and worked as a telegraph operator. He was a lifelong resident of the Edmore Michigan area, and died there in 1974, at the age of 79.

The parents of these two boys are: 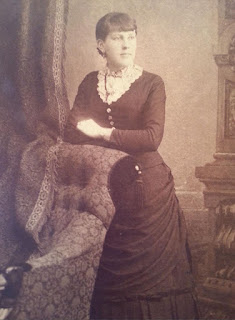 This photograph of Minnie Dunham Thomas was located in the same box of photos at the same booth. The back of photo reads:  Minnie Dunham, sister of Ida French, marrie James Thomas in 1891. 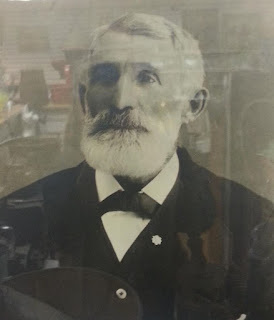 (I am not in possession of this photo. I saw it at an antique shop in Ballston Spa, NY, but because it is large and framed, I felt I would not be able to get it home with me to Kentucky. So I snapped a photo with my cell phone. If this is your relative, I can tell you where to find the shop.)

The back of the picture reads as follows:

Phillip was murdered in McGowersville, Albany. His murderer called him out at night to help a brother mason.


Every example of the name that I found on Findagrave and Ancestry records the surname as RICHTMYER, and not REICHTMYER as written of the back of the photograph.

This article from New York Herald, June 20, 1895.  This clarifies the name of the town as McKnownsville (not McGowersville as I had read it.) 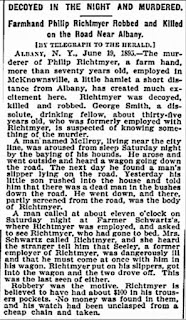 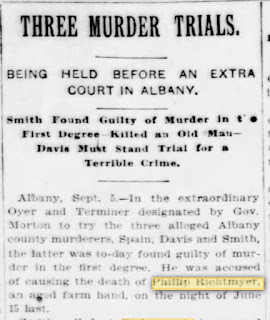 Posted by Kathleen at 5:20 PM No comments:

UPDATE - These photos of the Dunkman family have been claimed and are going home!
These photo were located at the Athens Schoolhouse Antique Show, just south of Lexington KY. 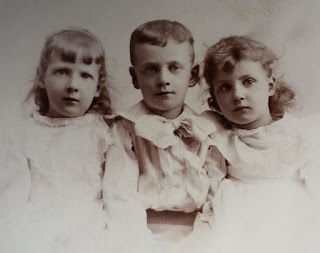 These are the first three children of Theodore C. Dunkmann (1859-1941, son of Johann Dunkmann and Helene Prote) and Margaretta "Emma" Lorenz (1861-1927, daughter of Nicholas Lorenz and Katherine Klei).

I generally do not buy photos identified with only first names, because there are not enough clues to find the correct family, however in this case, I bought the photo because the children bear a striking resemblence to Stella and Lawrence Dunkman, and oddly enough - also to Aunt Emma. The photo was taken at the same photographic studio in Cincinnati, at or around the same time, and located in the same box of old photos as the identified people. This led me to believe they were from the same immediate family.

It is possible that the photos came from Walter's family history collection, since he and his wife lived in Lexington (the photos were acquired very near there, and Emma would have been his aunt). But Walter had other siblings; Ethel, Ellie, Helen and William, but it is not known if any of them lived near Lexington.
Posted by Kathleen at 12:25 PM No comments: 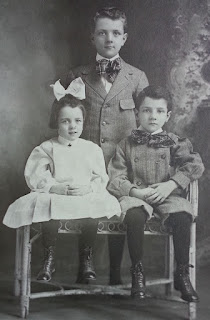 This photo of the Dennis children was bought for me as a gift by a friend. The photo was found at the Stone Soup Antique Store in Ballston Spa, NY.

I have since discovered that the children's mother was born Evelyn May Griffin (not Wright) but I suspect whoever wrote the note could not recall the woman's maiden name.

The children's mother Eva, grew up at the nearby village of Sing Sing as her father John Griffin was a keeper at the prison.

The eldest brother in this photo (Hilbert G. Dennis) died in February 1911 at around the age of 10. I cannot yet find a cause for this.

The following newspaper blurb regarding one of Fred's chickens was picked up by several papers in October 1911. 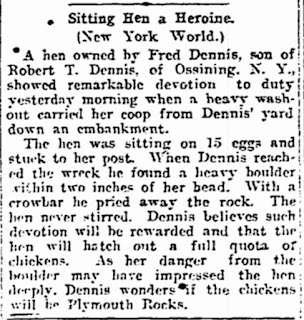 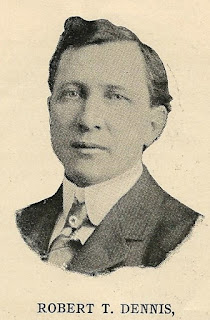 Father Robert T. Dennis lived to 1933. The following entry is found at Findagrave.com.

Lived on James Street. Son of Edward and Catherine Dennis. He came to Westchester County in the early 1860s and to Ossining in 1869. He was survived by his wife Eva Griffin Dennis, a daughter, Miss Katherine Dennis, and three sons, Robert, Jr., Frederick and John of the James Street address. Also survived by a brother Edward of Ellis Place. Service by Rev. Walter H. Lofthouse of the Highland Avenue Methodist Church. A biography printed in 1901 says he was Supervisor of the Town of Ossining. Received his early education in Sparta attending the district school in the hamlet and afterwards becoming a pupil at the school of the late Daniel B Ryder.
In 1877 he became an apprentice in the printing office of the Hudson River Chronicle at Scarborough. He later joined the composing rooms of the Democratic Register as a compositor. Became the local reporter of what became the Ossining Republican in addition to being a correspondent for a number of metropolitan newspapers.
In 1894 he was elected to the office of Town Clerk of Ossining and to which he has thrice been re-elected, resigning to take the office of Supervisor in November 1901. 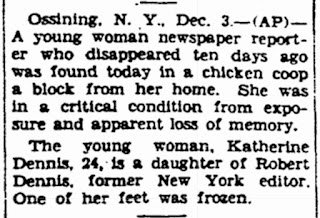 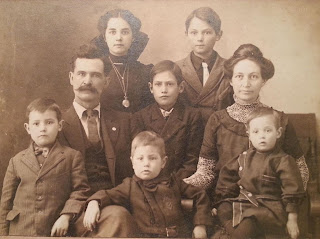 This photograph of the CAYLOR family was located today at the Athens Schoolhouse Monthly Antique show, just outside of Lexington KY.

The photo was taken most likely in or around April 1911 at a studio in the town of Kimball (no state given, but I have determined that it is Kimball Minnesota.) The back of the photo identifies each of the family members as follows:

The photo was therefore taken around April 1911. I have to wonder where 13-yr-old Ruth was at the time of the 1910 Census. It appears that the 1910 Census indicates "M2" for James and "M1" for Myrtle. I suppose it is possible that Ruth was a product of a first marriage and still living with her mother?

Backing up a decade - the 1900 Census shows the family consisting of James, Myrtle and 2 month old Irving. No mention of Ruth, who should have been about 3 years old at that time.

Ancestry.com has several family trees which identify James A. Caylor (1865 - 1948) as a son of Joel Caylor and Martha Ann Patsy Phelps. His wife Myrtle Jane Crider (1877-1959) is a daughter of Jackson Perry Crider and Mary Goble.