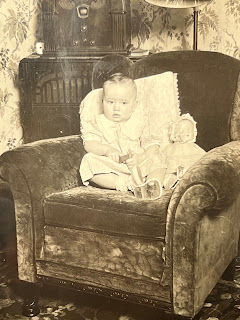 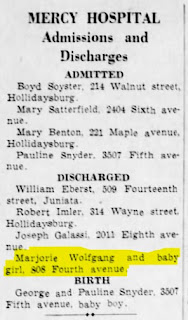 The family appears on the 1950 Federal Census for Altoona PA.

Ancestry.com mentions that Sally was attending Altoona Central Catholic School in 1958, when she would have been around 16 years of age.

Information appears to run out after that.

I will keep working on this one.

Posted by Kathleen Irwin at 10:22 AM No comments: 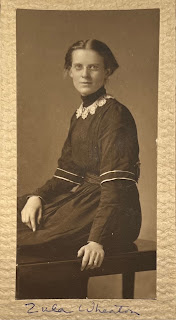 Her parents moved two hundred miles away to Charlotte Michigan (between Lansing and Battle Creek) around 1909/1910, but Zula remained in Chester, renting an apartment with two other girls, in order to complete high school in that location. She graduated High School in spring of 1910 and pursued a teaching certificate in Michigan. She passed the exam and by September of that same year had landed a teaching position in a one-room schoolhouse near her parents' home.

This story on the "Strange Schoolhouse" appeared in the Lansing State Journal, 13 May 1979.

Earl and Zula had three sons:

After Earl died in 1948, Zula returned to teaching and secured a master's degree in education.

In 1951, Zula's parents celebrated their 62nd anniversary, which was covered in the Lansing State Journal 07 Dec 1951. 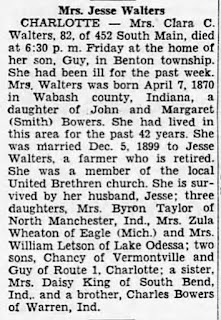 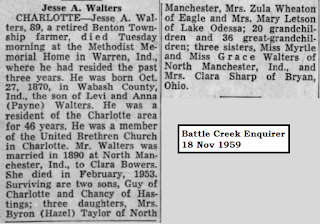 There is a wonderful memorial for Zula on her page at Findagrave, where I have added this photo.

Posted by Kathleen Irwin at 3:03 PM No comments: 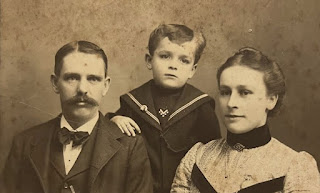 UPDATE - The Deuber family has been claimed and heading home to a relative!

Today I purchased my 900th vintage photograph.  This is Charles and Clara DEUBER of Akron OH, and the handsome lad in the middle is their son Lester. The photo was taken around 1902 when Lester was about age 4.

Charles at age 8 appears with his family on the 1880 Census for Holmes County OH.

At the farm next door, the 1880 census records John DEUBER (42) & Margaret (36) Zollman-DEUBER and daughter Clara (12). I presume this is a brother of Frederick. And at the next property, there is 81yo Michael Zollman and his 44 yr old step-daughter Marie Blumenstock, which I presume is family of Charles' mother.

I actually acquired three photos of this family, one of which was likely taken on the wedding day of Charles and Clara. They were married in or around 1896. At that time they made their home in Winesburg OH, some 13 miles away from the county seat Millersburg where the photo was taken.

The 1900 Census finds Charles at age 27, and his wife Clara Anna living in Akron with 3yo son Lester. He was born in Winesburg but was otherwise a lifelong resident of Akron.

Also living with the family in 1900 was father-in-law Christian Dellenbaugh (widowed), employed as a cooper, and brother Henry W. Deuber (age 25) working as a dry goods clerk.

(The last two are children of Charles eldest sister Margaret, who married Charles Schallioll, although I am not certain why they are living with Charles' family at this time.) 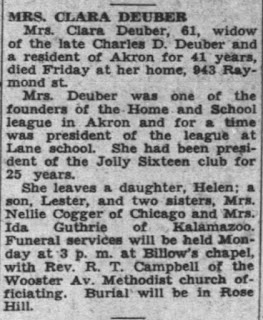 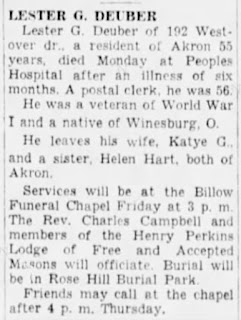 Lester George Deuber served in WWI. He married Katye Grace Rogers. Both he and Katye worked as mail clerks for the Akron Post Office. Lester died 13 July 1953 in Akron. He is buried at Rose Hill Burial Park. 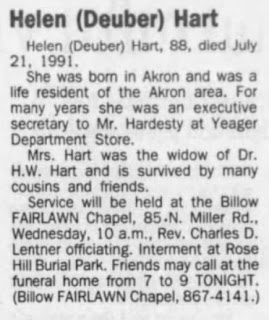 Helen married a dentist Harold W. Hart, and died July 21, 1991. She is buried with the rest of her family at Rose Hill Burial Park.

I find no evidence that Lester or Helen had any descendants.

Posted by Kathleen Irwin at 5:09 PM No comments:

In 1904, Bertha's mother passed away due to complication of diseases. This left Fred as a single father with 6 children ages 13-5 to care for. It is presumed that the eldest daughter Emma would have taken on a great deal of the work of running the house, until her father remarried in 1906 to a woman named Elizabeth Dowd who had two grown sons by a previous marriage.

On the 1910 Census for Hamilton (Butler County) OH, Bertha is 16, living with and working as a maid and cook for a pastor and his wife. That couple was named MYERS. Other than the age, all of the previous information seems to fit. Older sister Emma is also working for a Hamilton family as a servant. Her employer was a bridge builder named J.T. Guillaume.

The 1910 Census also shows Frederic Kohler and his family in Union Township (I am not entirely sure where that is located in relation to the town of Hamilton where Bertha and Emma had gone to work.

The 1920 Census for Hamilton shows a 25 year old Bertha employed as a servant in the household of a retail merchant named Howard Hyman.

In 1920, Bertha married William Edmund Glauch, a machinist who was also a prominent bicycle racer and trombone player. He and Bertha appear to have had no children. William died in 1953, twenty-three years before Bertha passed.

Posted by Kathleen Irwin at 2:40 PM No comments:

This is Martha Caroline SAMUELS, seen as “Mattie” on Census and newspaper records, and apparently known within her own family as “Tattie”.  She is the aunt of James and Walter NANTZ, described on the post directly before this one. Her photo was found in the same booth as the photos of her nephews.

Martha was married first to William M. SOWERS (1857 – 1889, the son of John Pleasant Sowers & Mary Mason Crenshaw. He died at age 32 and is buried in Larue County Kentucky.

She died at age 75, 21 May 1932, and is buried in Resthaven Memorial Park, Louisville, KY, where her nephews are also buried.

Posted by Kathleen Irwin at 6:52 PM No comments:

NANTZ, James B. and brother Walter

He worked for the Louisville & Nashville Railroad (L&N) for much of his life in various roles, electrician,  signal foreman, signal repairman. 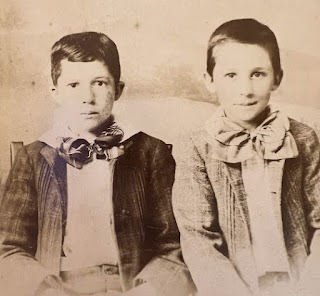 This photograph, also in my possession, shows James with his younger brother Walter Lee NANTZ (7 Mar 1882  - 16 Mar 1972). Walter is about 3 years younger than James, and the boys are approximately ages 10 and 7 in this image which was taken around 1889 in Elizabethtown, KY.

The 1900 Census shows the family at 3114 S. Fourth Street n Louisville, which interestingly is located on property which today is part of Churchill Downs Racecourse.

She and Edgar had one daughter:

At the time of his WWII Draft Registration (at age 62), James was living at 109 W. Woodlawn Avenue and his brother Walter was a block away at 107 W. Wellington Avenue.

Walter married Eva MARSH in 1923 and had a daughter:

-- they had no children. 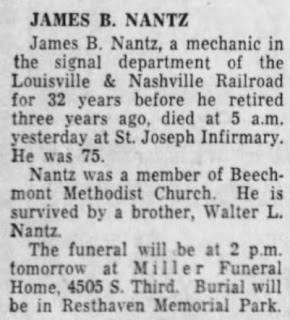 James died rather suddenly of a coronary blockage on 6 November 1954. He is buried at the Resthaven Memorial Park in Louisville.

James left quite a small fortune in his will with instructions for several gifts to be made to specific charities. Walter was the recipient of the remaining funds.

Walter died at age 90 in 1972 in Louisville and is also buried at the Resthaven Memorial Gardens in Louisville. 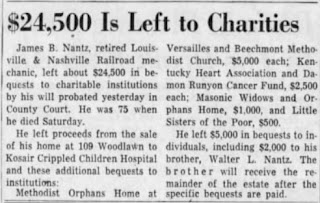 Posted by Kathleen Irwin at 2:07 PM No comments: 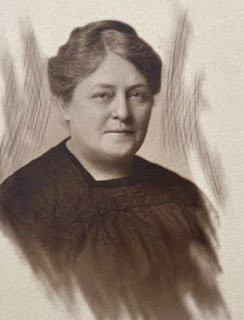 This is Minnie Mary ALLISON (later SAUNDERS), born Nov 1861 in Corvallis Oregon to parents Amos ALLISON and Lucy Jane LAKIN. She lived most of her life in nearby Albany Oregon with her family. (This photo was acquired at an antiques mall in Albany, and may have been sent by Minnie to a family member living there.)

She married Justice Wirt William SAUNDERS in 1896 and relocated to Spokane Washington where this photograph was taken.

The life-story of Wirt Saunders sold many newspapers from the time he was a young man through his death, and even beyond that. This historical recap of his life shows why he generated such interest. 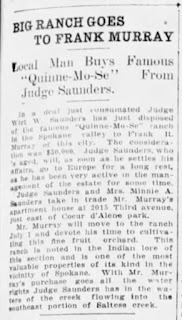 In 1910, the Saunders sold their "Quinne-Mo-Se" Ranch in the Spokane Valley to Frank Murray in exchange for $30,000 and also recieved in trade Murray's apartment in the brand new Duke Apartments in fashionable Brown's Addition area of Spokane.

1920 Federal Census shows the couple living at Apt A "Duke Apartments" in Spokane. The census tends to indicate that Minnie owned the whole apartment building. That is shown in the occupation section but is also crossed out.

The couple amassed a small fortune in Spokane, perhaps by means of savvy real estate investments since most mentions of Minnie in the local newspaper are in the section concerning real estate transfers. When Minnie died her estate was valued at $50,000 (a very large sum in 1924.) When her husband Wirt died later that year, his estate was near $150,000. 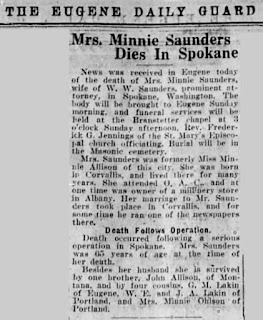 She died January 6, 1924 in Spokane. She is buried in the family plot at the Masonic Cemetery in Eugene Oregon.

Posted by Kathleen Irwin at 7:19 PM No comments: 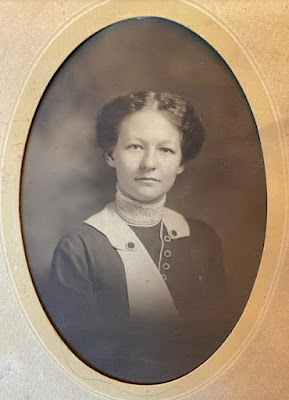 INDENTIFICATION ON PHOTO:  "Anna B. Perkins, U. of M."

At the time of this census, there is an elder sister Vesta Ursula Perkins, age 25, but she is already out of the house at this time. I wonder if the wife Ursula was also known as Vesta Urusula, since she is shown as "Vesty" on the Census. 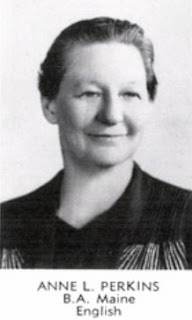 The image above was found online in the 1941 Passaic High School yearbook, where Anne Perkins was on the faculty.

This obit was carried in the 03 December 1963, Bangor Daily News:

Posted by Kathleen Irwin at 3:25 PM No comments:

She and her sisters were apparently gifted in "needle and fancy-work", as in Sept 1903, Ruth won the first-place award at the State Fair for "Best Specimen Hand-crocheted lace", 2nd-place in "Slide-board scarf", and her sister Ellen won second-place in "Best pillow shams."

At age 51, in 1906, married Eugene Prescott, a divorced spool-maker in Bethel. 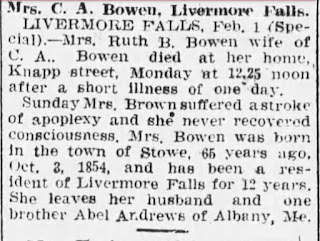 She later married C.A. BOWEN, and both are buried at Pleasant View Cemetery in Livermore Falls, Androscoggin County, Maine.

I find no evidence that she had any descendants.

Posted by Kathleen Irwin at 10:02 AM No comments:

As I acquired seven photos from the same family at the same Antique Show (May 2022 Athens Schoolhouse Antiques Show, Lexington Kentucky) I'd like to present them here in a single post.

This brings me back to Christopher Lester AVERY, the husband of Ellen COPP. His first wife Sarah Smith (1830-1869) provided him with four children:

Second wife Ellen COPP-AVERY produced a son and a daughter:

In order to help me see the relationship between these people, I sketched up a rough family tree showing where each of these found photographs (in yellow) fit into the overall tree.

Posted by Kathleen Irwin at 7:50 AM No comments: