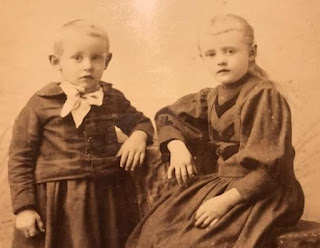 
This photo was located in the Stone Soup Antiques Gallery in Ballston Spa. The photo was taken in the Walter Otto Studio in Kittanning, Pennsylvania, in January 1893. Johnnie appears to be around 1 or 2 years old. Bessie appears to be between 5 and 6.

There was a McAdoo family living in Kiskiminetas Township, Pennsylvania, in 1910, which is only about 20 miles from Kittanning.

The 1910 Census describes Harriet as a widow.

NOTE - there is more than one McAdoo family in this area at this time. Research shows there was a different Johnnie McAdoo nearby, from a large family, and married, who died Apr 3, 1917 at age 25, with cause of death "killed by explosion in Conemaugh Coal Co. mine." But our Johnnie S. McAdoo appears on both the 1920 Census and the 1930 Census, still farming at home with mother Harriet and sister Bessie.

June 5, 1917, John Sylvester McAdoo registers for the WWI draft. Birthdate Nov 4, 1888 (he is age 28 at this time.) He claims exemption from military draft due to "only son of widowed mother and large farm to work."

1930 Census shows Bessie (44) is a public school teacher in Kiskiminetas.

Sister "Bessie" is seen on Census records as Bessie E., Elizabeth M., and Margaret E. From this I think we can determine her name was either Elizabeth Margaret McAdoo or Margaret Elizabeth McAdoo. According to Church records, Margaret Elizabeth McAdoo was born in Kiskiminetas township, Mar 15 1886 (thus not quite 7 in the photo) to parents John and Harriet T McAdoo, and baptized Sunday October 10, 1886 at St Paul's Episcopal Church in Kittanning PA.

April 27, 1942, John Sylvester McAdoo registered for the draft for WWII. He reports his birthdate as 4 Nov, 1888. He is 53 and farming in "Kiski Township". Closest relative is Elizabeth McAdoo of Avonmore PA, so we know that up to April 1942 she was still unmarried. 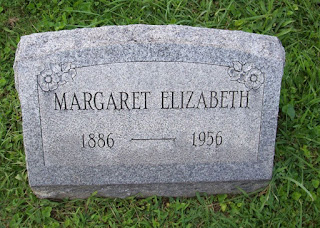 26 May, 1956, Death Certificate for Bess Elizabeth McAdoo, retired school teacher, never married, born 15 Mar 1886, died at Armstrong Memorial Hospital in Kittanning PA, but resided in Avonmore PA with her brother. She was 70 yo. Her mother's maiden name is shown as Harriett T. Campbell. Bess was buried at Edgewood Cemetery Saltsburg, Indiana County, PA. 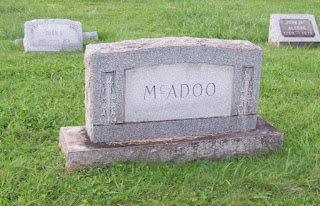 Many thanks to FindaGrave.com volunteers Rob and Debi Felten for supplying the headstone photos.

Posted by Kathleen at 1:51 PM No comments: 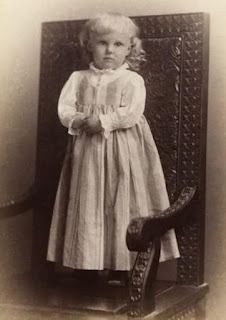 This photo was located at the Stone Soup Antiques Gallery in Ballston Spa, in the same booth as the previously posted photos Edwin Eggleston and Joe & Sarah Jennings Cook.

They also had a son Martin H. Post III.

These photos of Joe Cook and Sarah Jennings Cook were located at the Stone Soup Antiques Gallery in Ballston Spa, New York, in the same booth as the images for Edwin Eggleston and Dorothy Lee Rice.  The cabinet cards are trimmed at the bottom, presumably to fit into a specific frame, but enough of the photographer's mark remains to see that the photos were taken at one of the Heusted Studios in Jefferson County, NY, and probably around the 1890-1895 time period based on the look and feel of the images, and the clothing worn.

They had a child Lois Margaret Cook, born about 1897, who at age 22 (1919) married Merrill Wood Robbins (son of Glenn Robbins and Mertie Wood) who was a fellow student in her small graduating class at Union Academy in Belleville, in 1916.

Aunt Henrietta who was living with Sarah and Joseph in 1910, is a sister of Edwin Lee Eggleston, previously researched and posted.

This photo was one of five located at one of my favorite Antique shops; Stone Soup Antiques Gallery in Ballston Spa, NY. Based on the large tie knot, it must have been taken around 1890. The studio was the Ralph Huested Photographic Studio which had branches in Mannsville, Ellis Village, Belleville and Henderson, Jefferson Co., New York.

At age 29, in 1862, Edwin enlisted in the Civil War with Company E of the 10th NY Heavy Artillery, and attained the rank of Sergeant. He returned home to Henderson in 1865.

1890, June 4, Watertown (NY) Daily Times - this fascinating newspaper snip (at right) mentions both Edwin Eggleston visiting the town of Henderson, and Ralph Heusted opening his photographic studio. This may actually have been the very time this photograph was taken, because Eggleston was living in Ontario Canada at the time, but was visiting in Henderson.

Edwin died April 13, 1922 in Los Angeles. This obituary for Edwin was located in the Watertown (NY) Daily Times, April 22, 1922. (You can click on the obit pictures for a larger image.) 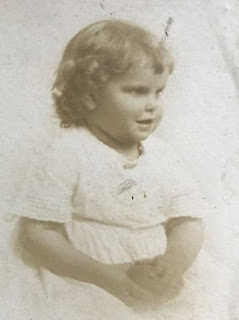 UPDATE - this photo has been claimed by Mabel's son, and is going home. This photo was located at the "127 Yard Sale" today near Salvisa, Kentucky.

The photo is of a charming toddler in the early 1910's, but the inscription on the back has been torn and obliterates a portion of the middle name and surname. Fortunately, I bought it anyway on the assumption that Pittsburg Kansas has never been a large community, and I should have a fairly easy time of combing the Census records to find a matching name and age.

This turned out to be a good assumption.

From 1920 onward, the family appears at 104 E Adams. Unsure if that means the family moved to the house next-door, or if the address numbering system changed.

1933 City Directory for Pittsburg, KS. reports that Patty Marsh is a teacher at Roosevelt Jr High School, and resides at 104 E Adams with her parents.

I am still working on this subject. I have not yet determined if she had any children or grandchildren who may survive into the present time.