UPDATE - Blanche has been claimed by a relative and is going home!

These two photos were found in Pomona California last week, at the Pomona Antique Mall. 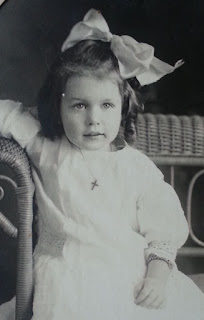 Evan Rackliffe was much older than his wife Olive, and died in 11 Nov 1916, when daughter Blanche was only 3. Olive moved back in with her parents William B. Knox and Margaret J. McDougal, as can be seen on the 1920 Census.

The second photo was taken in Biddeford Maine and shows Blanche presumably as a graduating student in 1930.

She was born April 15, 1913, in Westbrook, the daughter of Evan D. and Olive M. (Knox) Rackliff.
Blanche was educated in Saco and Portland, graduating from Thornton Academy in 1930 and from Gray's Business College in 1932. She was employed 37 years as a secretary and bookkeeper for Flanagin's Auto Sales of Madison and for five years at Edwards Funeral Home in Madison. For several years she did volunteer work for AARP.

Blanche is survived by several cousins.

A funeral service will be held at 10 a.m. Friday, March 19, at Giberson Funeral Home, 40 Maple St., in Madison with the Rev. Nathan T. Richards officiating. Interment will be in Woodlawn Cemetery in Westbrook.

Posted by Kathleen at 5:54 PM No comments: 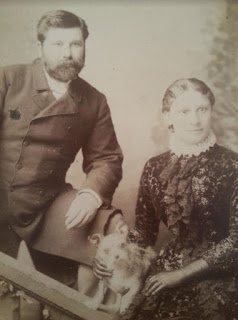 UPDATE - this photograph has been claimed and is going home to England.

I did not record where I acquired this photo, but I suspect it was in the Utica, New York area, about 3 years ago.

The photo was taken at Miller Royal Photographic Studio in Yarmouth (England). The studio was located at 182 King Street, over Nalls Library. I was able to confirm that the photographic studio was indeed located over Nalls Stationary Shop and Library on King Street in Great Yarmouth, Norfolk, England.

According to Norfolk Parish records 1538-1900, there was a physician named Alexander Mitchell (born 1848?) living in Yarmouth, Norfolk, England in 1882, who married in Parish Church East Dereham on 28 Feb 1882 to Ellen Eugenia Ramsdale (1856-1925). Alex's parents were James Mitchell (Deceased) and Isabella Scott. Ellen's parents were Robert Ramsdale (deceased) and Mary  ____.


This listing of marriages was found in the book "The Medical Times and Gazette, A Journal of Medical Science, Literature, Criticism and News, Volume I for 1882."

Robert Ramsdale, sibling of Margaret, Matthias, William, Sophia and Mary Ramsdale, died in 1859 at age 41. He was an auctioneer of corn and coal in East Dereham. Parents were Thomas Ramsdale and Margaret Haylett. This confirms he was in fact deceased at the time of his daughter Ellen's marriage.

Wallace R. Miller Photographic Studio at 182 King Street, Yarmouth. Operated at that address between 1880 and about 1887. Wallace Miller died around 1882, but the studio was continued by his widow Elizabeth Miller for several years under the same name.

James Scott Mitchell was Alex's one-year-older brother (born 1847). He was born in Glasgow Scotland, married 1) Mary Hay (died 1882), then 2) Anna Burns and emigrated to New York with his wife and children. He died in West Winfield NY in 1930.

The following obituary for Dr. Alexander Mitchell was located in "The Times, London, 24 Apr 1913."


He is found on the 1881 English Census, as a single 31-year-old Doctor of Medicine, living at Burton House on Regent Street, Great Yarmouth.

He and Ellen (and two servants) are found on the 1891 English Census living in Tower Hamlet, Poplar, London. His occupation is Doctor of Medicine, Surgeon.

The 1901 Census find the couple at St James, Westminster. No children.

In 1911 he is found alone on the Census for Brendon, Devonshire, as a boarder. He states he is a Doctor of Medicine, married 29 years and has had no children. There is no mention of why Ellen is not with him. Perhaps he was simply traveling at the time of the census.
Posted by Kathleen at 12:58 PM No comments: