UPDATE - The SWANN children have been claimed by family and are going home!

The back of this portrait is labeled: "Harvey Julian SWAN (6 yr 3 mo), Hazel Gertrude SWAN (2 yr 1 mo)" and there is no indication of location.

However, research finds that the photo had to have been taken in March 1890 in Salem Massachusetts. The siblings were found on census records there.

These are two of the three children of William A. Swann and Ella A. Hutchinson.

Harvey attended Brown University in Providence RI, class of 1905, and graduated with a Bachelor of Arts degree in Germanic and Romance Languages and Literatures. 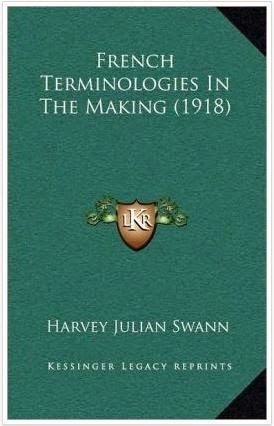 He traveled at least three times to France, and published at least one book in 1918; "French Terminologies in the Making; Conscious Contributions to the Vocabulary". 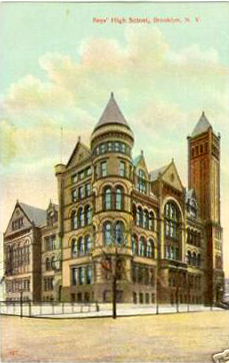 On his WWII draft registration card, he indicated that he lived in Brooklyn NY and was employed by the NYC Board of Education, working at Boys High School in Brooklyn (photo at left.) 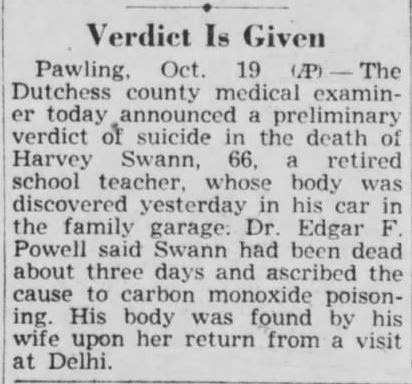 Harvey appears to have died in Oct 1951 of carbon-monoxide poisoning. The following appeard in "The Kingston Daily Freeman" (Kingston, NY) on 19 Oct 1951.

Youngest brother, Camden Jean Swann, married Ethel Jessie Lewis in 1912. He moved back to Salem Massachusetts and worked at a leather company.

It is unknown what became of Hazel. She disappears after the 1910 Census.


UPDATE - Through a very remarkable coincidence, I revisited the same Antique Mall in Wildwood Florida two years later, acquiring a few more photographs. One of them was of Camden Jean SWANN, the younger brother of Hazel and Harvey. Thus I was able to reunite the family photos that I'd inadvertently separated two years earlier. This photo of Camden was taken around July of 1890 at the Edward Hazelton studio in Salem.

On 29 July 1912, Hazel (age 23) married Thomas Irving Fenno (son of Thomas J Fenno and Katherine Upton), in Milford NH. This explains why Hazel "Swann" disappeared after the 1910 Census.  Special thanks go out to Allene Dewitt Tanges who provided this information, which opened the following floodgates.

In 1920, Thomas and Hazel Fenno are found on the Census in Salem Mass, living on Cedar Street. Thomas (35) works as a bookkeeper for the Gas Company. Hazel (30) has no occupation. There are no children in the household.

In 1930, same address. Thomas (45) works as a store manager (office mgr?) for the public utilities. Hazel G. (41) has no occupation. Still no children in the household.

1959 City Directory for Beverly Mass. Both Hazel G. and Thomas Fenno are shown with the occupation of "clk White Elephant Shop."

It is evident that neither Harvey nor Hazel had descendants. That leaves Camden Swann to save the day.

They had a daughter Jessie Swann-Chapin (b. 10 Mar 1920 - d. 29 May 1994) who is clearly the niece mentioned in Harvey's obit. Jessie married Graton Andrew Chapin, a dairy farmer and apple grower in Essex Center, VT.

Jessie Chapin's obit mentions that she had three children. I think it best to not list her children's names here as they are surely still living. But I will start making contact with them as soon as possible.
Posted by Kathleen at 8:31 PM 2 comments:

Last weekend the Antique haul consisted of nearly 20 individual photos of members of the IVES family of the Wallingford Connecticut area.  The photos appear to have been torn out of a family photo album, as some still have remnants of black paper stuck to the edges. I sorted out all I could find of the predominant surname (IVES) and bought those. Since the other surnames were probably also relations in some way, I should have acquired all of them, just to keep them together, but my budget was not that large.

Here is the list of those I brought home. I will include a few photos here, but probably not all of them. Some are from formal sittings at a studio, but most are snapshots.

LAURISON IVES - (1846-1905) The Census records tell an interesting story. His father Wooster Yale Ives ran a hotel in Wallingford, CT, and while other siblings got married and left the household, Laurison remained to help him. He eventually married later in life (around 1891-1892). Laurison was around 45 and his young wife Alice Scranton was around 21. They had three children; daughters Jessie and Laurette, and a son Wooster Laurison Ives.

JESSIE, LAURETTE and WOOSTER LAURISON IVES - Eldest daughter Jessie was born in October 1893. Laurette was born Nov 1896, and Wooster was born in 1900. Their father dired in 1905 and mother Alice remarried within a year or two to William R. Andrews. When daughter Jessie married Edison Leonard, she took her siblings with her into her husband's home, while her mother began a new family with Andrews.

WALTER EARL IVES - was a son of Delano Wooster Ives and wife Emily Frances Bradley. He was born in 1878 and died in 1964. The original photo has numerous discoloration marks, but I was able to manipulate the digital image here so the marks are less noticable.

Other photos from the same vendor:

There were more photos which I did not purchase that were labeled with the surname "Umba" which I have seen in some family trees as "Umbaugh." These appear to be a related family to Ives.

If I can find this same vendor again when I return to the area in December 2015, and if the photos are still available at that time, I may look for more Umba photos. (UPDATE - I never saw that particular vendor again.)

Some more of this group of photos:

This photo of "S.A. RATHBUN" was located at an antique fair in southern Florida this weekend.

The photo was taken around 1900, at a photographic studio in Bloomington Illinois.

This turns out to be Silas A. Rathbun, prominent merchant and for 6 years, mayor of the town of Pontiac. 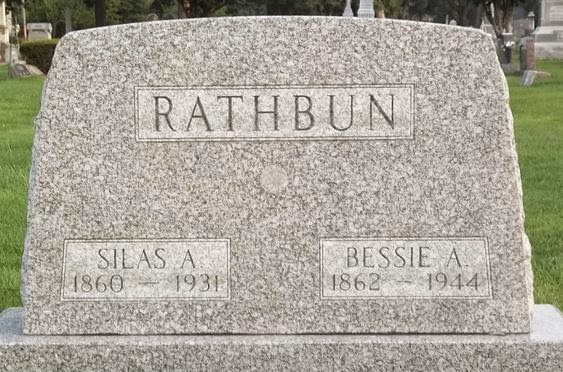 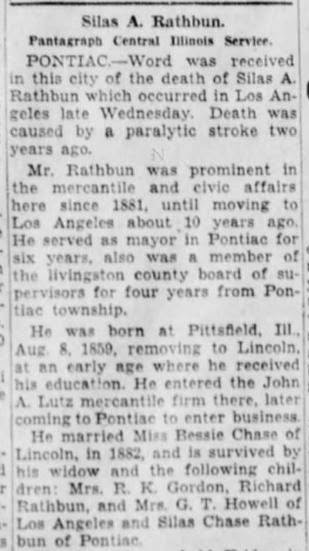 This obit was carried in the Bloomington Illinois Pantagraph, 25 Sept, 1931, page 2.

Photo was located at an antique fair in Palm Beach County Florida at a booth which also had numerous photos of a family named IVES (future post coming on that group.) I suspect the families may be related.

This photo was taken at a photographic studio in Holyoke, Massachusetts, probably circa 1918. The back contains the hand-written note identifying the subjects as: 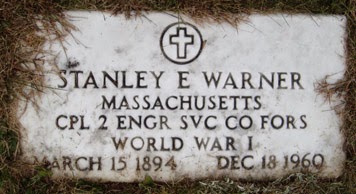 Posted by Kathleen at 6:46 PM No comments:

UPDATE - Lotten Larson has been claimed by a relative in Sweden and is going home. This photo was located at an Antique Fair in Palm Beach County, Florida.  The back contains the hand-written note: LOTTEN LARSON, just here from Sweden, Amos's mother (send to Vera.)

Photo was taken circa 1890 in Manchester New Hampshire. The woman appears to be around 20 years old, thus born around 1870 in Sweden.

Searching through records at Ancestry.com, I found a family tree which reveals that Lotten was born July 15, 1870 in Slattabacken, Sweden to parents Lars Andersson and Johanna Svensdotter.

She arrived in America in the summer of 1890 and resided in Manchester City, New Hampshire. 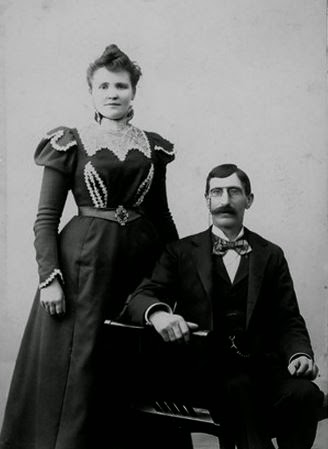 On the family tree at Ancestry.com there is a different photo of Lotten Larson and her husband Albert, but it is clear the photos are of the same person.

Her son Amos lived and died in New Hampshire with his wife Vera Louise Lindahl, who is likely the person requested to be the recipient of this photo of her mother-in-law, whom she never knew. It appears that Amos and Vera had no children. In the 1940 Census, Amos' father Albert is living with the couple. Amos' occupation is travelling salesman for a cash register company.

This post represents my 100th researched photo in this Blog series.


This image, taken at a studio in Boston between 1895 and 1900, features three children, although the back of the photo only identifies one child; Mary Brooks.

As there is only one name given, and fairly common name at that, the task to find the right family is made more difficult.  But we will start by looking in the Boston Mass census records for a Mary Brooks of the right age, with an older brother, and a sister.

So far, only one family is found on the census which meets this criteria.

This mean "Mary" is the elder of the two sisters in the image, and would be the one at the far left of the photo.

(Looks lied she may have lied to the census-taker about her age. If she was born in '88, she would be 32 at the time of the census. The rest of the family has aged correctly.)

Massachusetts Death Index shows her years of life as (Jan 28, 1888 - April 22, 1983, died at Weymouth). She apparently never married, as she died still using her maiden name.

Posted by Kathleen at 7:34 AM No comments:

UPDATE - This photo has been claimed by a grandson of Nina Krause, and is going home. This photo was acquired at the Palm Beach County Fairgrounds, at an antique show held there in February.

It contains no clues as to location. My best guess for time period is around 1895-1900. There are three children, identified as Nina Krause, Leonard Krause and Robert Krause.

Using census records, the only instance I see of children with these names in the same household is the 1910 Census for Bethlehem Pennsylvania.

The Findagrave entry for the father, Edward, reports that his parents were Robert Parmenio Krause (1830-1866) and Hortensia V. Weber (1833-1902). Edward was married twice, first to Sarah Coleman Lee, who died in 1892, then to Nina M. Lee (1864-1905), who very likely was a relative of the first wife.  Among Edward's sibling's there is a Henry A. Krause (1860-1930) who is most likely the neighbor on the Census. Henry A. Krause's page at Findagrave lists wife Mayetta Roberts and only one son; Leonard (1892-1978) thus the Lenard (Leonard) in the photo is a first cousin of Nina and Robert, as well as next-door neighbor. 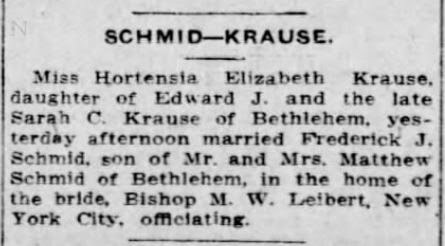 Leonard Krause married Mary Dech and the pair remained in Bethlehem for the remainder of their lives.  Nina married John Leibig. I cannot find a marriage record for Robert.

Eldest daughter Hortensia, mentioned in the Census, married Frederick J. Schmid on Sept 12, 1912. The news was carried on page 1 of the Allentown Democrat the following day.