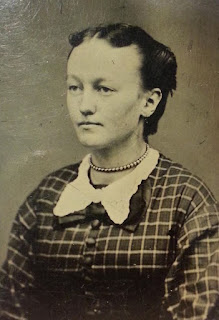 This tin-type photo was located at the 2015 Antique Show at Oxford, Kentucky.


The back of the photo has a hand-written note taped to it, which reads "Esther Elsie Giles or her mother Abby M.B. (Houghton) Giles". I have been able to determine that this is indeed the mother, Abby.  Photos of this type, and the fashion she is wearing, point to a time period between 1865-1870.

Abby's children were born between 1853 and 1870 (daughter Elsie was born in 1855 and would be between 10 and 15 at the time this photo was taken). But this is a photo of a mature woman, so I feel confident in identifying her as the mother.

Abby M. Houghton (1836-1880) was the daughter of Calvin Houghton and Hannah Dwinell. She married Barnabas Giles (d.1906), a farmer in Windham Vermont.

Posted by Kathleen at 3:40 PM No comments:

UPDATE - this photo has been donated to the Johnson County Historical Library in Coralville, Iowa, for use in their exhibit on the history of the Flexible Flyer.

This photo was located at the Palm Beach County Fairgrounds, in December 2015, at their monthly Antique Fair. 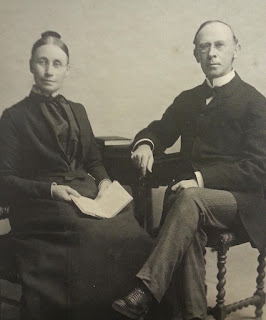 Taken at the Gilbert Studio in Philadelphia PA.

Census records nearest the time of the photo, find them in Burlington NJ, a suburb of Philadelphia. 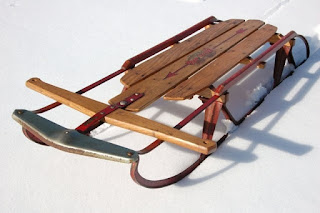 Samuel has his own Wikipedia page, which identifies him as an inventor and holder of nearly 300 patents, including the "Flexible Flyer" sled and numerous items of farming equipment such as the seed drill, potato digger, grass edger and many others.

Concerned that his Farm Equipment employees would be laid off over the winter months, Samuel Allen (a great sledding enthusiast himself) devised a winter top-seller in the Flexible Flyer. 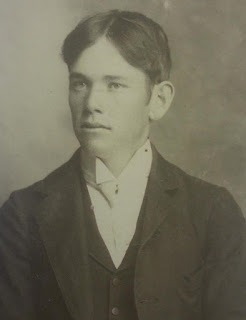 UPDATE - Joe Yearian has been claimed by a relative and is going home. This photo was located in one of the many antique shops in the Madison-Baukville area of upstate New York.

The subject appears to be around age 20 and the photo was probably taken around the turn of the century, so estimating a birth year of around 1880.

Census Records at that time find a young man of this name living in Lemhi county with his parents.

On his WWI draft registration (dated Sept 1918) he gives his occupation as "unemployed miner" and his full name as Joseph Harlan Yearian. 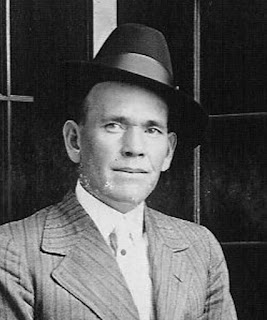 Findagrave.com has a record for Joseph H. Yearian, complete with obituary and photograph from later in his life. I present that here for comparison. (I do not possess that photo, only the one shown at the top of this post.) Find-a-Grave memorial states that his parents were Henry Wells Yearian (1852-1924) and Mary Frances Weir-Yearian (1855-1924). Siblings are Nora, George, Lillie and Theodocia.

Obit remarks that Joe never married, but was a friend to all in the community. 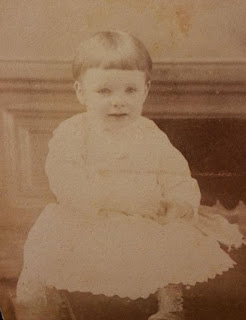 UPDATE - Alice Mary Gowing has been claimed by a relative and is going home!  No location stamp, but the name is unusual enough, we should be able to find her.

I find no mention of her, or her parents, at the FindaGrave.com website. But her brother Henry and his wife Belle are listed there. They are buried at the Dublin Town Cemetery. It is possible that the other family members are also, but just not included at the moment, at the website.

It would appear that Alice never married or had children. At the age of 55 she was still listed as single on the census and still using her maiden name. 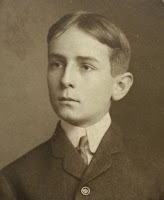 The photo at left, along with several others from the same family were located today at the Antique Fair at the Palm Beach County Fairgrounds. This photo of Thomas Reardon Linton was taken in Altoona PA probably in 1904. Thomas was the son of Harvey Linton, the City Engineer of Altoona.

The photo at right was located a month later at the same venue. It was probably taken 3 to 4 years prior to the photo at left.

Harvey Linton was born Feb 22, 1844 to parents Nathan and Martha Linton. He descended from Scottish Quaker immigrant John Lynton who arrived in Philadelphia in 1692.

There was also a photo of Louise R. LINTON acquired from the same antique vendor. I believe this is Thomas' mother. This photo was taken in Philadelphia, PA.

In 1903, daughter Ethel was married at her parents home to Mr. Edward J. Searles of Pittsburg.

In 1904, at the age of 17, Thomas Reardon Linton sailed for Panama, employed to work as a surveyor on the canal.

In June 1908, Thomas moved to Vancouver, British Columbia where he met and married Canadian Elsie Hodgson in 1910. He worked there for the Canadian Pacific Railway in their engineering dept.

In 1917 he enlisted in the military for WWI, giving his occupation as Mining Engineer.  By 1920, the family had returned to Pennsylvania.

In 1919, Harvey Linton relocated to Baldwin NY to live with his daughter and her new husband John Stuart Rominger.

Sadly, daughter Mary Louise Linton would die at age 3 when she ran into the street into the path of an oncoming coal truck, in Harrisburg, PA. in 1922.

1930 - father Harvey Linton dies at age 86 (Dec 1930) in Chicago where he was living with his daughter Mrs. Rominger. They had moved to Chicago two months previously, and were ten years in Philadelphia before that. 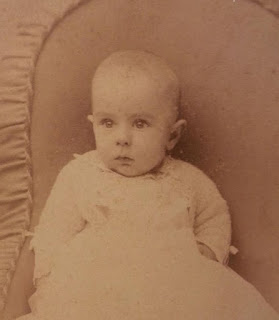 I also came across this photograph of a young child whom I believe to be Thomas Reardon Linton. There is a name scrawled on the back, which appears to say "T. Reardon Linton", but it could just as easily be translated as "J. Rubeo Luthern."

I will post front and back of that photo here, and you can decide for yourself. But I believe it to be Thomas as a child.

Then, as if that was not enough from the Linton family, here is a photo of Thomas' younger brother John Linton (born 1903).


Also, in the same box, this photo (below) of M. Albert Linton and Ester P. Linton. Photo was taken in 1899 according to the hand-written note on the back, but no location is given.

Census records find this pair of siblings in Burlington NJ.

Head of household, Morris Linton, is a brother of Harvey Linton of Altoona, so this pair of siblings (Morris Albert Linton and Ester Powell Linton) are cousins of Thomas Reardon Linton and John Linton. 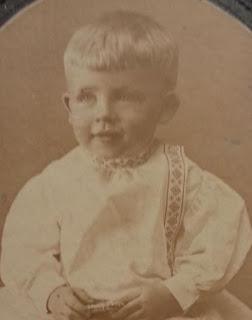 In January 2016, at the same vendor, this photo was found. There is no location anywhere on the frame. On the back, the inscription appears to say "Aunt E.L.H." and "Ned" "Edw Linton".

I need to look into this family a bit more to find how Edward, Edwin or Ned fits in, and who Aunt E.L.H. is. 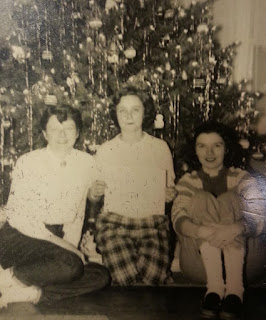 This snapshot was located today at the Antique Show at the Palm Beach County Fairgrounds, in Florida.

The three young ladies appear to be in their late teens or early twenties, so one can estimate years of birth around 1935.

Since there was no clue as to the location of residence, I took to the Census Record search at Ancestry.com and for each name found multiple possibilities in various locations. However, one location came up for all three names, and that was Hempstead, Nassau County, New York.

Coincidentally, there is a MULLER family living next door at 5 Seaman Ave, but I do not see a Barbara among the children. However, at 115 Seaman Avenue, there is a family headed by CASGROVE (or COSGROVE) and two of the children in the home are named MULLER.

This makes me think that the Muller children are step-children of the head of household. Both sons are the same age. Mother, Mae Muller-Casgrove was born Mae Friel. Possible first husband is Charles Muller. Her father was James D. Friel.

The addresses for each girl would make it likely that they attended Baldwin Senior High School nearby, and were also likely in the same graduating class.

Still researching this one, but please comment if you know either of these families. 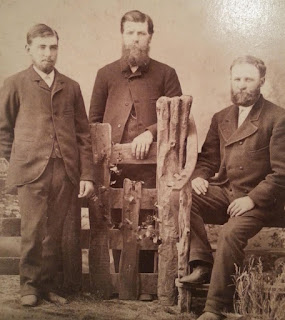 Photo was found in August 2014 at the Madison-Baukville Antique Fair in New York State.

Here is a photo of three brothers; Stephen, John and Alfred McDermott, taken probably between 1885 and 1890 in Evansville, Rock County, Wisconsin.

In consulting a map of Evansville, WI, I see that there is a road named McDermott Road which lies roughly equidistant between the neighboring towns of Evansville and Albany.

First stop was checking into the Census records for that area.

Ancestry.com find a number of family trees in which these brothers appear.  Most of them include the fact that Stephen died in 1909 in Nebraska.

Findagrave.com has a record of a Stephen McDermott buried in Peckham Cemetery, Lincoln County, Nebraska. He was born Aug 14, 1859, died Nov 2, 1909. His headstone remarks that he is a son of M.McDermott. 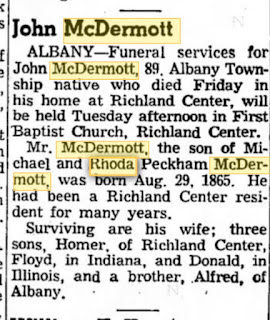 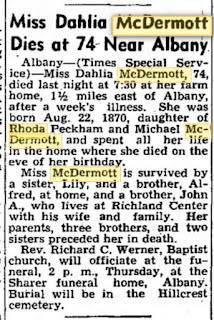 Younger sister Dahlia lived her entire life at the family home in Albany, Wisconsin and died on the eve of her 75th birthday. The newspaper insert of her passing was reported in the Monrose Wisc Evening Times, 22 Aug 1945.

There was an older brother Martin who was already out on his own by the time of the 1880 Census. He was born in 1854 and had three sons; Stephen W. (born 1882), and twins Alfred and Elbert (born 1894). Stephen and Alfred whom appear to have named for their uncles. Stephen William McDermott married Fairy Frances Masters around 1909. This photograph may have been their wedding photo, based on their clothing.

The photo was taken at the "Miss Rankin Photo Studio" in North Platte, Nebraska, and was found in the same box at the antique fair as the photo above of Stephen's uncles. 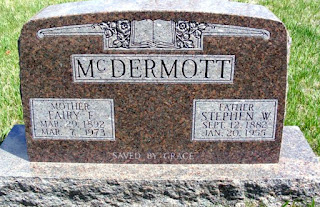 Stephen W. McDermott and wife Fairy are buried at the Wellfleet Cemetery in Lincoln County, Nebraska.