I do not generally acquire photos which are not identified, because the odds of making an identification without any clues is too astronomical to calculate. And without knowing who the subject is, there would be no finding a relative.

But once in a while, I end up with an unidentified photo. Usually on accident, sometimes on purpose.

I have decided today to occasionally post a few anonymous photos, in the hopes that someone "out there" will be able to help with the identification.  Any known clues are included.

UPDATE - This photo of "Anonymous Mascoutah Man" is going home to the Mascoutah Historical Society.

This photo was acquired in a thrift store in Morgantown, NC, and was recently sent to me in the hopes that I could discover who the gentleman is.

It was taken circa 1905 in Mascoutah IL at the photographic studio of Frank B. Strathmann.  Strathmann operated his photo studio in Mascoutah from (probably before) 1896 and up to 1906 when he sold the studio and relocated to Kansas.

The young man's fashion, particularly the small size of the jacket lapels and style of shirt collar, indicate a time period of around 1905.

That is about all I know about this image.

I found a memorial for the photographer Frank Strathmann on Findagrave.com, and looked at photos of the photographer and his offspring (which are linked to his page) and I feel that this young man bears a certain resemblance to the photographer's eldest son, also named Frank.

Here are two images known to be of Frank John Strathman (or Strathmann): 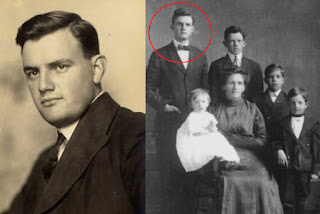 I contacted a member of the Strathman family. She reports that despite a similarity, the man in my photo is not her grandfather Frank John Strathman.  I will keep looking.

These two photos were emailed to me by a friend. She knows the subjects are relatives of hers, who lived in New York and are of German heritage. She'd like very much to get these relatives identified better. 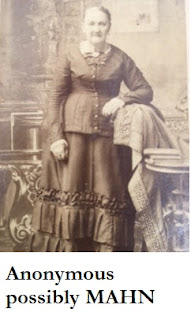 The first woman had her picture taken in New York City at a studio called "Schwind Portraits" located at 27 Avenue A, in East Village, Lower Manhattan, NYC.

She is likely from the family with the surname MAHN, although could also be from related families of ERHARDT, STARK, or even O'CONNOR.

Her fashion points to a time period of about 1880.


This young lady sat for a photograph at the studio of "J.K.Cole" which was located in Manhattan, on 6th Avenue between 12th and 13th Streets.

She bears a strong resemblence to an identified woman Elizabeth Stark Erhardt, who sat for her photo at at A&G Taylor Studios just four blocks away on Broadway, so I think this girl must be an Erhardt or Stark. Maybe a cousin or sister of Elizabeth Erhardt?

There remains a remote possibility that she comes from related families of Mahn or O'Connor.

The shoulders on the dress of the young woman point to a time period of around 1890-1895.