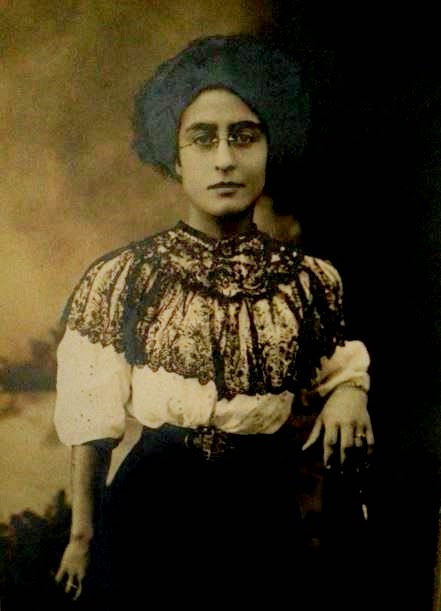 This photo was located in upstate New York. It was originally taken at the Holmes Photographic Studio on Broadway, in Albany NY.

There is a paper cover, which when opened reads:

Find-a-Grave's website has the same photo, and apparently someone there has already done all the research for me. The following comes from that site:

"Aunt Ida" would appear to be Idella Long, a sister to Edith's father.

UPDATE - Arthur and Augusta Lewis have been claimed by a granddaughter and are going home!

Also found in an antique shop in upstate New York was this portrait of siblings Arthur and Augusta LEWIS.  The photos was taken at a studio in Cortland, New York circa 1900.

FindaGrave.com was very helpful in locating information on the sister.  According to that site, Augusta was born Jul. 21, 1898 and died on Dec. 21, 1974.  She married Ralph Fairchild. Here is her obituary, copied from her memorial at that site:


Mrs. Augusta L. Fairchild, 76, died early Saturday morning in County General Hospital, Dade City, Fla. She had been a life resident of the Cortland area.
Born in Cortland on July 21, 1898, she was the daughter of Marion and Mertie Weed Lewis.
Mrs. Fairchild was a member of the First Baptist Church of Cortland, Iolanthe Rebekah Lodge of Homer, ladies auxiliary of Cortland City American Legion Post 489, auxiliary of the World War I Barracks of Cortland, and auxiliary of the Letter Carriers' Association.
Surviving are a son, Lewis D. Fairchild of Homer; a brother, C. Arthur Lewis of South Orange, N.J.; a step-grandson, Bruce J. Knowlton of Waldorf, Md.; three nephews and several cousins.


The brother's full name was Chester Arthur Lewis. He married Winifred Bumpus in 1921 and lived in New Jersey to the age of 83. The Census of 1920 shows he was an electrician at a wire mill. The 1940 Census says he an Electrical Foreman. At that time he has three sons; Arthur, Roderick and Warren. Winifred survived him by about 5 years. Both are buried in Otsego County, New York.
Posted by Kathleen at 11:22 AM No comments:

UPDATE - Clyde, Bob and their mother Mertie have been claimed by a relative and are going home!

Today's project is a couple of photos found together at an antique shop in Madison New York. They are of a family which lived in Madison, New York at the turn of the century.

The first photo is labeled "Mrs. Charles Lewis, Madison NY" and was taken at a studio in Waterville, NY. The photo probably was taken circa 1885.

The second photo is of brothers "Clyde and Bob Lewis, Madison, NY" and was probably taken around the same time period.

We can assume that Clyde is the elder of these two brothers in the photo, since his name was listed first. And if the Clyde on the Census was 21 in 1900, then he was born around 1879. If the guess that the photo was taken about 1885 is anywhere near correct, and if this is the same family shown in the Census, then the ages of the boys in the photo are approximately 6 and 4, which appears to be possible.

The 1880 Census shows the same family in Madison NY, although at that time, it consists of only Charles, Mertie and Clyde. We can safely assume that Robert was born around 1881.

There are graves in the Madison Village Cemetery, in Madison NY, for some members of this family. Find-A-Grave.com lists the following, although does not offer photos.

In the nearby town of Hamilton in Madison County, NY, there a headstone for Robert E. Lewis (1880-1974). It appears that he had a wife named Grace Catlin.