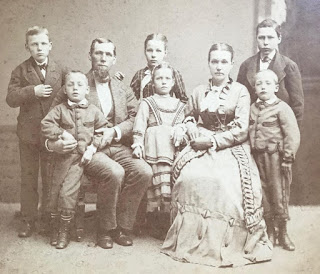 
There is also note in pencil on the back of the photo indicating that the photo was originally purchased in Bayshore, Long Island, NY 1977.

This is the Tower family of Porter Township, Niagara County, New York, which is a farming community north of Buffalo.  The Tower family was one of the original pioneer families in this area.


Peter and Porter are twins. There was also an earlier son named Frank Tower who only lived to age four (1861-1865). 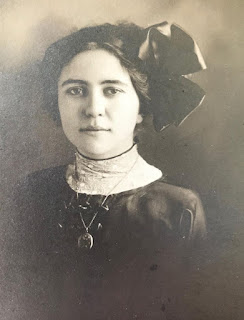 Based on the fashion worn by the subject, I place this photo around 1910. The subject appears to be around 16 years old, so a working birth year of 1894 will get me started.

As luck would have it, the 1910 Census has a Jennie M. Keefer, born about 1894, living in Schenectady NY with her family.

1912 Schenectady City Directory - Jennie Keefer appears, and is described as "employed at Maqua Co., boards at 955 Strong." The Maqua Company was a book-printing and binding company.

1972, Sept 5 - death of Jennie Osterhout, burial at Park View Cemetery, Schenectady (according to her memorial page at Findagrave.com )

1975, Nov 16 - death of Harry Osterhout, burial at Park View Cemetery, Schenectady (according to his memorial page at Findagrave.com )

Younger son Walter lived to age 94, passing away in 2013. I have found the obituary, but since it lists living relatives, I will not post it here. However, I will use that information to try to contact some of Walter's children or grandchildren who may be interested in the photograph of Walter's mother. 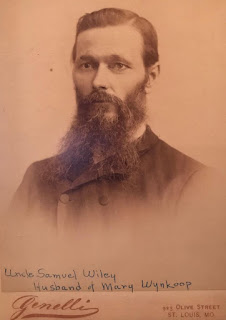 Litchfield is about 55 miles North-East of St. Louis MO.

Samuel T. Wiley's page at Findagrave says he was born 21 Jan 1840 in Wilmington DE. Died 7 July 1923 in Philadelphia PA, and is buried at Northwood Cemetery in Philadelphia next to his wife. But the 1880 Census says he was born in Maryland. The 1900 Census has him born in Delaware. I think the confusion lies in the fact that his family moved from Delaware to Maryland when Samuel was still young.

(I see a strong possibility that his wife Mary Wynkoop is a sister of George W. Wynkoop, born in Illinois 1849 to Virginia and Maryland parents. Both photos were found in the same booth at the same antique mall. See post directly below this one.)

Mary C. Wiley died 31 May 1931 in Philadelphia PA at age 88. Her death Certificate states that her husband was Samuel T. Wiley. She was born in Illinois to parents Joseph Wynkoop, who was born in Virginia, and Rosanna Pipper, born in Illinois. Informant was her daughter Viola M. Williams.

(NOTE - the 1850 Census for Buckeye Illinois has the Wynkoop family of Mary Wynkoop (8), her parents John & Rosanna Wynkoop, several siblings including 2yo brother Washington Wynkoop.)

Posted by Kathleen at 6:36 AM No comments: 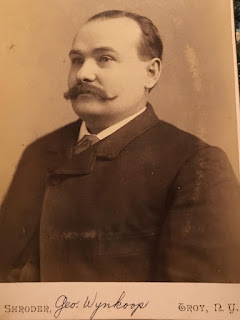 
This is George W. Wynkoop, born Nov. 1849 in Illinois (I am not yet able to find the names of his parents). Most of his life was lived in Troy NY.

He was in the iron and nickel industry.

By the age of 25 he is already in Troy and enumerated on the 1875 State Census. His occupation simply says "brass" but I take that to mean that he works in a metals factory. A few homes away is the Halse family including 18 yr old Kathy Halse, daughter of store manager John Halse. 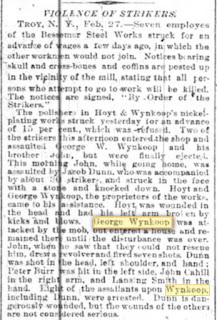 February 27, 1880 - this story (at right) appeared in the New York Times covering an assault upon George Wynkoop and his business partners at the nickel-plating works by striking workers.


(NOTE - The Wynkoops live right next door to the Halse family, which are the immediate family of wife Catherine Halse-Wynkoop. Her 21-yr-old brother Theodore works in the iron foundry.)

The 1890 City Directory for Troy shows that he works at "Hoyt & Wynkoop Foundry" on Spring Street, and resides on Pawling Avenue.

After his death, Catherine moved to Alexandria Virginia and lived with two of her daughters there. 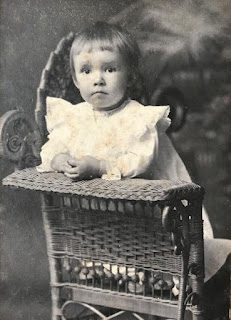 
Donald was born 30 April 1904 in Pennsylvania, and appears on the 1910 Census for Warren, PA (which is about 15 miles south of Owego NY).  At some point in his childhood, his family moved to Owego, Tioga County, New York.

Mother Nellie died in 1914, and by the time of the 1920 Census, father Ralph was remarried to Florence.

A Binghamton news article of 1936 mentions him as the manager of the Endicott airport.

The 1968 obituary for Ralph W. Beardslee mentions his two granddaughters Dale and Barbara Beardslee, who both still apparently have their maiden names.
Posted by Kathleen at 7:20 PM No comments:

His parents' names are not found, but by 1900 he was living with his grandparents and aunts.

His name appears in the 1906 Yearbook for Hamilton College, Clinton, NY (about 20 miles southwest of Utica.

A family tree in Ancestry.com has Herbert Rawling Hemmens, born 29 March 1884, living in Utica during the 1900 Census.

Grandfather, James Hemmens was co-owner of Sherwood & Hemmens, a tobacco and cigar-making factory.

Around 1904 or 1905, Herbert married Mable Canfield, daughter of William Walker Canfield, who was editor of the Utica Observer-Dispatch newspaper.

Going back in time a bit, the 1880 Census was enumerated before Herbert was born, but might prove useful in finding his father's name.

1888 Utica City Directory shows that among James' sons, only Thomas R. Hemmens is living at his own home. The other sons are still living at 4 William Street in their father's house. This would tend to indicate Thomas was married and raising his own family.

Thomas R. Hemmens died 27 Sept 1895. This is looking more and more like Herbert's father. I wonder what the "R" stands for.
Posted by Kathleen at 1:14 PM No comments:

This is Jane "Jennie" Lyons, born Dec 1865, to Irish immigrant parents James Lyons (1829-1913) and Catherine Doyle (1829-1900). She had siblings Mary, James, Anna and Thomas. She and Mary were born in Wisconsin, and her younger siblings were born in Minnesota.

Jennie died in 1946 at age 82 at Prior Lake, Minnesota. She is buried at Saint Peters Cemetery in Credit River, Scott County, Minnesota next to her husband, and near her parents. 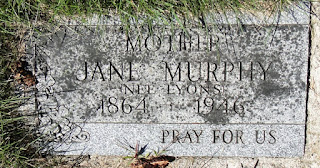 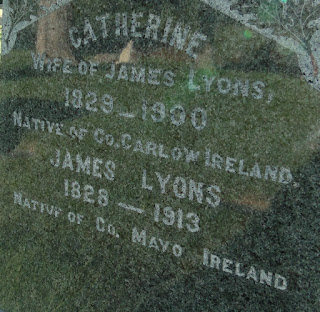 Posted by Kathleen at 2:39 PM No comments: 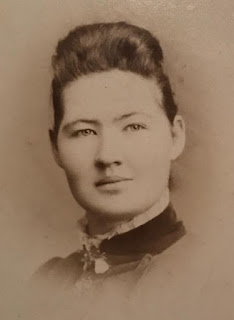 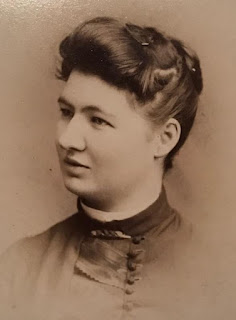 Also at the same booth was found this photograph of Anna Magner, twin sister of Catherine.

Their younger sister Adelaide became a celebrated artist. This story on her appeared in the Minneapolis Journal, 09 Sep 1906.


Father John Magner died at age 76 in January 1907. He, his wife, and several of their children are buried a Calvary Cemetery, Saint Peter, Minnesota.

Catherine Magner-White died in 1935. Her obituary appeared in the Minneapolis Star Tribune on July 28, 1935.

Brother James L. Magner, died Feb 14, 1935, according to this article in the Minneapolis Star Tribune. This obit gives some good family information, including the fact one of his surviving sisters is a nun in Canada, and is known by the name "Sister Mary of St Joseph" but she is not his actual sister Mary, as she is mentioned earlier as a surviving relative. I believe "Sister Mary" is actually Anna, and looking again at the inscription on the back of her photo, I believe it now to say "later Sister St. Joseph". (see back of photo). The reference to Dr. E. Magner is eldest sister Ellen "Nellie" Magner who was a Minnesota Osteopath. 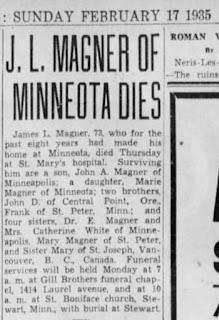 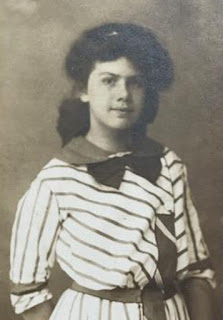 
The back of this photo bears the following inscription: Spring City PA. Anna M. Marshall. Then below the name is written two question marks. I think the question marks might signify the writer's lack of confidence in the time period of the photo more so than the identity of the subject.

I am presently searching for a more recent photo of Anna Marshall to compare against this one. Until then, I am proceeding as though this is Anna Maud Marshall.

Anna Maud Marshall was born 9 Sep 1893 in Haverford, Pennsylvania to parents Frank Carl Marshall (1870-1951) and Mary Bessex Humphreys (1872-1958). She had a sister named Gladys Marshall (1897-1972) who married Charles Sower and they had a son also named Charles Sower.  I see no evidence that Anna ever married. 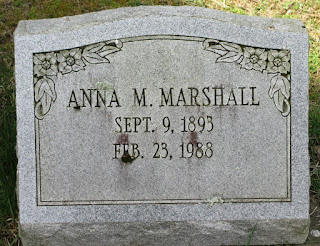 Anna died 23 Feb 1988 in Broomall PA at age 95, and is buried at Lower Merion Baptist Church Cemetery in Bryn Mawr, near her parents.


At the Antique Show, I found a booth with probably a hundred old photographs in a large enamel wash-basin. My husband and I spent probably 15 minutes scanning the backs for identification. In the group I was perusing, I came across one labeled "Lena Wedde" and right next to it one labeled "Clara" with no surname.

My standard modus operandi would be to leave Clara behind because she'd be impossible to track down without a surname. But as luck would have it, Clara was right next to Lena in the basin, and I could see that the handwriting was the same on the back of both photos. So I flipped both over to the front side, and saw an immediate similarity between the girls right down to the same hairstyle.


Furthermore, the photos were taken at the same studio in St. Louis. I decided to purchase Clara also, convinced the two were sisters.

The minute I got home, I logged onto Ancestry.com and started checking Census records and family trees, and found the Wedde family in St. Louis in 1900. Parents Henry (46) and Margaret (40), with children Lena (17), John (16), Clara (13) and Mary (7). Henry is a carpenter and son John is a machinist at a car company. Lena has no occupation, and the younger sisters are at school. 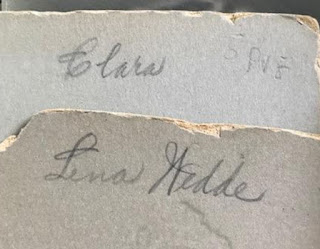 The 1920 Census report is largely unchanged. Henry is a patern-maker in an iron factory. Lena is a dressmaker, Clara is a seamstress, and Mary is a music teacher.

Lena and Clara never married. After the death of their parents, the sister lived together at 5187 Rosa Street, supporting each other until their own deaths in 1963 and 1958 respectively.

Posted by Kathleen at 1:57 PM No comments: 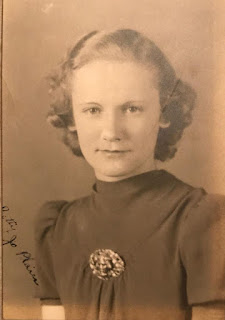 The photo appears to have been taken for inclusion a High School yearbook, and the subject appears to be around 17 or 18 years old.

August 21, 1943, she married Vernon Earl Arnold, a military cadet. Eight months later, she was widowed when Vernon was shot down over Germany. 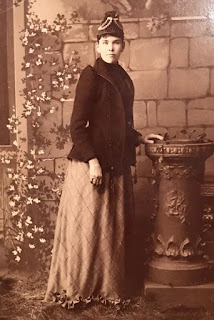 This is Ella Gertrude Costello, born 16 Sep 1965 in Minnesota. She was a daughter of Martin Costello and Bridget Bedelia Welch. 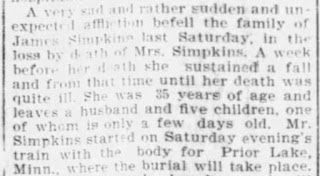