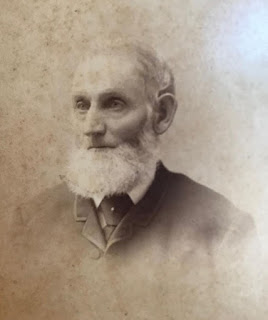 This photo has already been sent home to the subject's great-great grandson.


I had not even had time to research Jehiel Judd when I received an email from a man who said he had seen Jehiel's name on my Index page (link here) which includes all of the 750 or so photos I have in my collection, the majority of which have not been researched yet.

But I did want to do a brief search for information on the man, just to make sure this was the same Jehiel Judd that the person hoped he was. Based on the fashions being worn for this photo, especially the small lapels on the jacket, it appears to have been taken between 1880 and 1885.  The gentleman in the image appears to be late 70s or early 80s. That means he was born around 1800 (give or take a few years).

Initial searches at Ancestry and Find-a-Grave show that there are a few men who have been named Jehiel Judd. This particular one is Jehiel Joel Judd, born 9 Oct 1799 in Greene County, New York, and died 21 Feb 1888 (Nebraska) and buried at New Hope Cemetery, Monroe, Platte County, NE.

His son, Jehiel James Judd (1838-1914) was a Lieutenant in the Civil War and lived in the Catskill area southwest of Albany NY.  It is easy enough to presume that the elder Jehiel had this photograph made in Albany during a family visit.

I have also sent him the image of the younger Judd, which I do not possess, but was sourced from Find-a-Grave.

It's great when someone reaches out to me as a relative of one of my photo subjects! It happens once in a while and certainly saves me a lot of work!
Posted by Kathleen at 8:13 PM 5 comments: 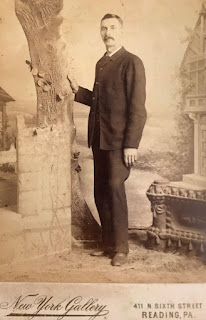 
Born Dec 9 1870 to parents Isaac Bauscher and Sarah Noll, Alfred was a carpenter in the small town of Fleetwood, which is situated about 10 miles northeast of Reading. He later worked for Fleetwood Metal Body Company, an automotive coachbuilder purchased by Fisher Body and later integrated into General Motors. 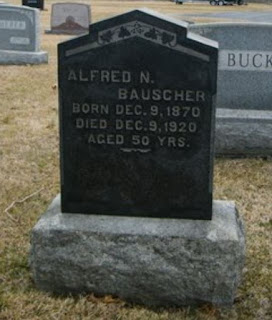 Alfred was married to the widow Clara Berg (nee Mertz, dau. of Isaac & Florinda Mertz) in October 1893. This was a second marriage for both, as Clara's husband had died in 1982.

Alfred was previously married in 1889 to Isabella Deisher (1871-1893, daughter of Daniel Deisher of Kutztown, PA).

Alfred lived to be exactly 50 years old, dying on his birthday in 1920, from a fall from scaffolding a few weeks earlier. I find no evidence that he ever had any offspring. I may be able to find existing relatives through his siblings.

Alfred is buried at the Fleetwood Cemetery in Berks County PA.

His brother John Noll Bauscher was the railroad station agent in Fleetwood. He was married to Adeline Merkel. John died in 1930, and his obit states he has grandchildren. John and Adeline had the following children:

Posted by Kathleen at 2:52 PM No comments: