Not a person's photograph, but still too important a treasure to leave it sitting there!

This is the High School Diploma of one MARIE THERESA SUREL, who graduated from Cathedral Central High School in Detroit Michigan on June 12, 1936.

In the same bi-fold presentation cover, there is a small card detailing the classes that Ms. Surel successfully completed. These are Apologetics I & II, Stenography I & II, English VII & VIII, and Bookkeeping I & II. 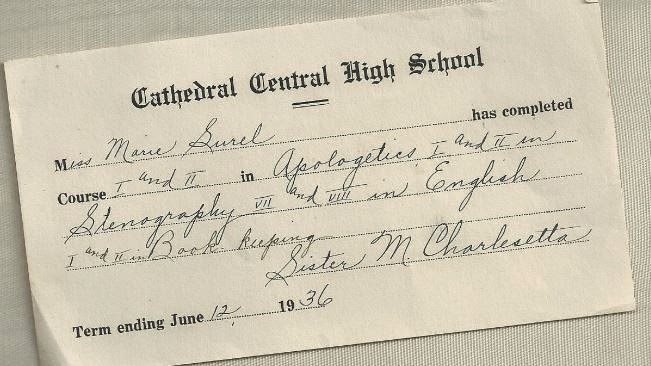 I admit, I had to go to Google to learn what Apologetics could possibly be. But now I am all that much wiser. According to Wikipedia:  "Apologetics (from Greek ἀπολογία, "speaking in defense") is the discipline of defending a position (often religious) through the systematic use of information."

Perhaps we would refer to that as "Debate" or "Public Speaking" these days.

In trying to determine who Marie Theresa Surel could have been, I started first at Ancestry.com and looked at the 1930 Census records for the area.  I found only one family with that surname. They lived on Riopelle Street in Detroit. Father John, mother Paulina, and children Walter, Sofia, Maria and Edwin. In 1930 the daughter Maria is 13 years old, making her the correct age to graduate from High School in 1936. The slight variation on the spelling of the name does not overly concern me as names on census records are often slightly "mis-recorded." The parents were born in Poland. The children were born in Michigan. The father's occupation is "Butcher."

The following newspaper article was published in late April of 1931. Marie/Maria would have been fourteen at that time: 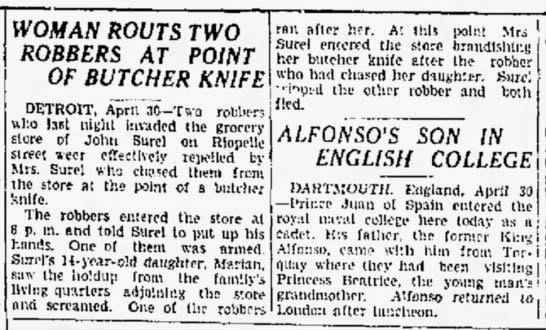 Let that be a lesson to the would-be robbers - Never threaten the daughter of a butcher.

On the 1940 Detroit census, daughter "Mary" is 22 and living at home. Her occupation is "Inspector" in the Automobile Industry.

I believe the following are the dates of life for Marie Theresa Surel-Smigielski:

UPDATE - Norma Stanley has been claimed by a relative and is going home!   This photo, found in a basket of old photos at a West Palm Beach, Florida antique fair, is labelled as "Norma Stanley" and bears in imprint of a photographic studio in Webster City Iowa.

Just guessing, I'd say the date of the photo could be anywhere between 1905 and 1920. I am not certain how long the "bowl" haircut has been in use for children. But I have another photo (of another person) which seems to be done in the same sort of process which results in a very shiny background, as in this photo, and that previous photo was dated 1909. So that may be a similar time period. Then again, that process may have spanned many years.

NORMA ARLENE STANLEY (born 1912) Webster City, IA.  At the age of 2, she was found on a State Census card, residing in Webster City, Hamilton County, Iowa. However, the card is for the individual only, and does not mention any relatives. Still it confirms that a person of that name lived in the community.

Further research shows that Norma married at the age of 16 to Orville Cuckler. She and her husband moved to Albany (Athens County) Ohio where they are enumerated on the May 1, 1930 Census. Her daughter Mary was born (and died) May 16, and sadly Norma died 4 days later, at the age of 17.

It appears that the baby who died was a twin. There is also a Geraldine Cuckler, also born in 1930, who at the age of 9 appears on the 1940 Census for Scipio, Ohio, living in the household of William and Blanche, her grandparents, and identified as "granddaughter."

Posted by Kathleen at 5:50 PM No comments: