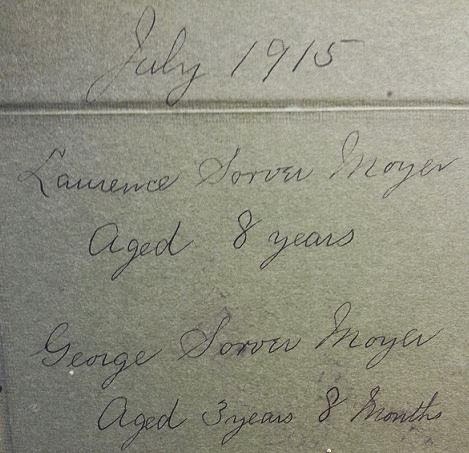 This photo of Laurence and George MOYER was acquired at an antique show in West Palm Beach Florida.

There are no studio marks or indication of where this photo was taken. However, the writing on the back of the photo clearly identifies who these children are.

By accessing census records, I was able to determine that these two boys are the sons of the Norristown PA dentist Dr Mason K. Moyer and his wife Evaline (Sorver) Moyer.

The elder boy (Laurence) graduated from the University of Pennsylvania and became a scientist in the field of protein research. He was tragically lost at age 35 when two Navy training blimps collided on June 8 1942, off the coast of New Jersey. Twelve souls are lost in the nightime collision, including five civilian scientists.

The younger brother (George) is found on the Norristown PA census of 1940, listed as 28 years old, married, and employed as a cashier at a bank. At that time, he was living with his wife, daughter and mother, who was widowed in 1930.

Armed with this much information, I expect it should be a fairly easy task to locate a living relative who would like to have this photo back into their family archives. 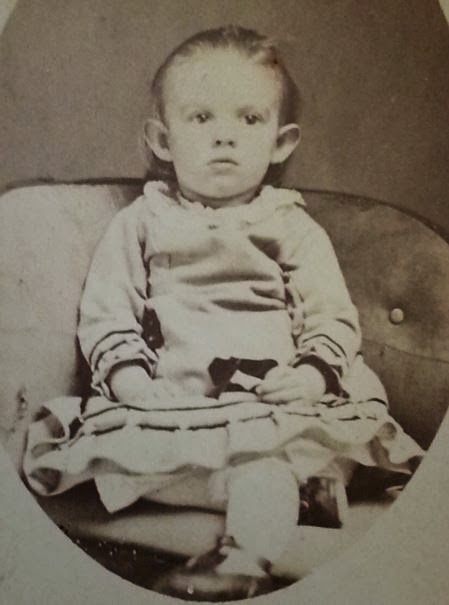 UPDATE - Despite having very few clues on this young lady, Mary has been claimed by a relative and is going home.  This is going to be tough to place. This photo, found at the South Florida Antique Show, is simply labelled "Mary Coolidge (Lucas)"

There is no indication of where or when the photo was taken, but best guess for a date would be circa 1880. There are no photographic studio marks on this one.

Will set to work researching this right away.

Posted by Kathleen at 4:03 PM No comments: