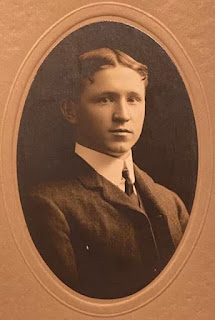 
Not sure if the inscription on back says "Geneseo" or "Genesee", however the only likely person I find lived in Batavia NY which is in Genesee County.

At the age of 19, Morris enlisted 11 Sept, 1899 in the Army (40 US Infantry Vol) during the Spanish-American War, and saw action at Libmanan in The Philippines in 1900. He left the service June 24, 1901. His service record card describes his character as: very good, honest and faithful.

He is also counted among the family members on the 1900 Federal Census in Batavia NY, enumerated on 19 June, 1900.

The year after arriving back home in Batavia NY from his military service, he became ill and his mother Florence sat up with him at his house through the night. The following morning she was walking back to her house when she was struck and killed by a train, sadly in full view of her 13yo son Murry. (Rochester Democrat and Chronicle, 22 May 1902.)

Morris worked as a machinist at a steel fabrication company in Batavia. 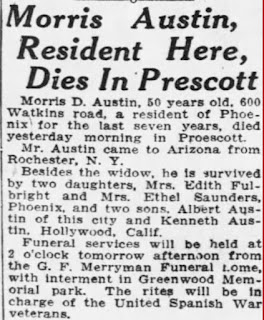 Around 1923 Morris moved his family to Maricopa County, Arizona. In 1924 Morris and an associate named Bob Collier went into partnership and opened an automobile garage at Five Points (the intersection of Grand, 7th and Van Buren Avenues). 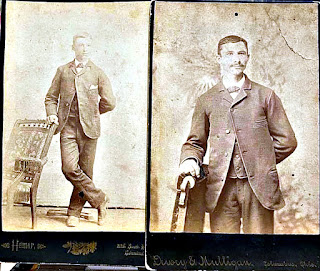 
These two photos were purchased together, but I find I never recorded them on my master log when I brought them home, so I am left with no record of when or where they were acquired. 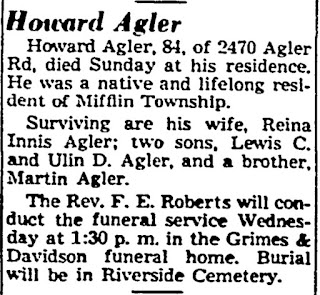 This obit for Howard (at right) was found in the Columbus Dispatch, 8 Mar, 1948.


John's obit mention no widow or offspring of his own, but does mention lots of nieces and nephews.  This make me think I should be able to find the correct Agler family to whom I may send these two photographs.
Posted by Kathleen at 2:55 PM No comments: 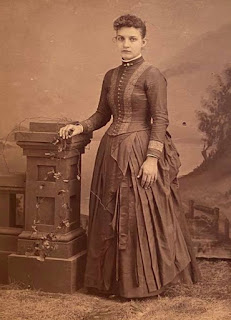 
UPDATE - Rosetta Litten has been claimed by her great-great grandson and has gone home!
The back of the photo clearly says "Mr. Levi Litten". However, the woman in the photo is obviously NOT "Mr. Levi Litten" but must be connected to him somehow.

This style of dress was fashionable in the late 1880s. By 1890 sleeves were becoming larger and puffier. But in the late 1880s were still "streamlined", narrow throughout with no rise at the shoulder. The hairstyle is also correct for late 1880s.

I believe this is Levi's wife Rosetta Netzley, and the photo was possibly mailed to Levi, before the time of their wedding in Nov 1889. (Also, she bears a strong resemblance to Levi's granddaughter Geneva whose photo I found online at Ancestry.com .) 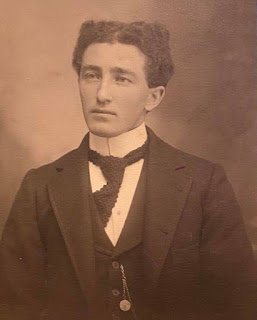 
Without a location as a clue to who this might be, I was left with several possibilities, ranging from Pennsylvania to North Carolina. Fortunately, I was able to find a photo in newspaper archives of an older James Sechler (in 1951 in Pennsylvania) and could see that it was the same man.

Children mentioned in his 1952 obituary include: Kathryn (wife of Paul Keller), and Isabel (wife of Warren Henninger). Preceded in death by siblings Fred, George and Emma.

The 12-October-1951 edition of the newspaper "The Morning Call", Allentown PA, carried this insert of the celebration of James and Emma's 50th wedding anniversary. It appears evident to me that this is the same individual as the young man in the photo I found.
Posted by Kathleen at 12:02 PM No comments: 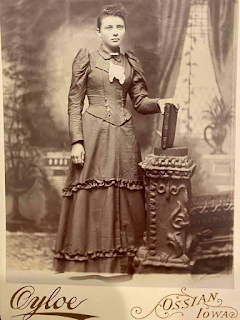 Langdonroad.com is a fantastic resource which lists vintage photographic studios across the country, and the years they were in operation. Oyloe Studio is said to have been in Ossian at least between 1901-1902. I do not know if that means it could have been there earlier (or later) but perhaps City Directories are not available to verify their presence.

There are apparently lots of Andersons in this area at this time. The name Annie Anderson is a common one. Here are a few which were in the area, and at the correct approximate age:

And finally, there was an ANNIE WIELING-ANDERSON, born June 1869 in Iowa and married to Theodore Anderson in Jan 1891 in Ossian. By 1910, she and her family had moved to Woodbury County Iowa. She died in 1926. 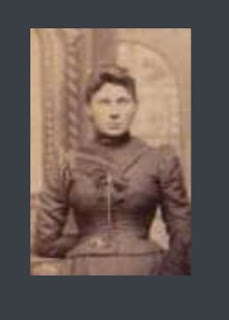 I think this last-named Annie is the one in the photograph above. While researching Annie Andersons of Winneshiek county Iowa, I found a family tree on Ancestry.com which shows an image (albeit small and unclear) of Annie Wieling-Anderson and the photos may show the same person. They look very much alike.


But I think I will have to wait for some relative to reach out to me with verification of this.
Posted by Kathleen at 8:11 AM No comments: 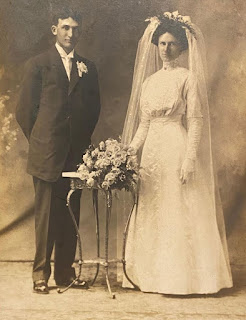 This appears to be the wedding photo of Martin and Agnes Stark, taken in Wheaton Illinois, but the couple lived much of their life in nearby Bloomingdale Illinois.

Martin and Agnes were married on 19 May 1911. Their grandfathers were brothers, making this couple second cousins to each other.

All of their children were born in Illinois:

I cannot find the reason why two young brothers died within a day of each other in 1928.

This photograph of the couple taken much later was found elsewhere on the internet. I do not possess this photo and include it here for comparison. I only have the wedding photo shown above. 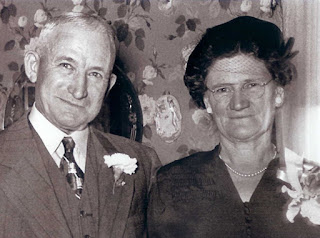