This photograph of Agnes Gladys Rising and her parents was found at the Stuart Antique Show at the Martin County Fairgrounds in Florida.

The photo was taken circa 1902 at "The Bolton Studio", although I cannot determine where that was. The family lived in Hartford County Connecticut.

The back of the photo bears the hand-written identification "Agnes Gladys Rising, age between 2 and 3 years, with mother Leila Rising & father George Rising."

I was able to locate the family on census records for Windsor Locks, CT. All three were born in Connecticut, of Connecticut parents. George's occupations is given as a manager of a Telephone Station.

George Craw Rising (born in Poquonock Mar 22, 1875 - Nov 23, 1944) son of Charles Rising and Adelaide "Addie" Griswold, was the manager of a telephone exchange in Windsor Locks, Connecticut. He retired in 1938. Besides Agnes, he also had a son Ralph who died of lockjaw in 1929 following an injury incurred in a construction accident.

Leila B. (maiden name not known) (Nov 1876- March 9, 1912) was George's first wife. She died of an enlarged spleen and liver following several years of ill health.

Jessie Wilson was George's second wife. She died in 1978 in Florida. She and George had a daughter Elaine (Rising) who married Rolland Dalrymple. 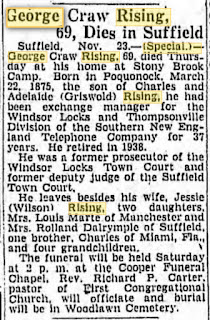 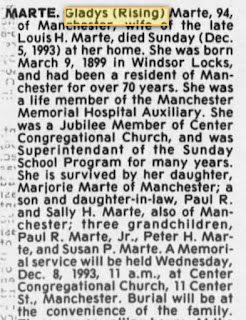 Posted by Kathleen at 2:26 PM No comments: