In December of last year I was contacted by a writer for GEO Magazine, a German-language educational magazine, not unlike National Geographic. He had stumbled across this blog and found it intriguing enough to want to share the project with readers in Europe.

In their March issue, the article was published. I will share it here with you, translated from German:

American Kathleen Irwin, 55, bought 575 old photos from peddlars over the past 30 years. With her blog she wants to unite the people in the pictures with their living family.

Kathleen Irwin did not let go of the first photo. Who was the woman on it? And why was the picture with the antiquarian and not in a family album? Irwin began to explore the biographies of people on old photos - and to contact their descendants. You can read the stories on the blog "Old Photos Found".

GEO: How did you come to research the story of strangers?
K: 30 years ago, I bought an old photograph, of a nameless woman from about 1890 with a high lace collar and pinned-up hairstyle. I looked at her every day and wondered who she had been. I felt it was a tragedy that she had become anonymous. It was not until about a decade later it occurred to me that it should be possible to reunite such photos with their family.

How do you go about it, how do you do research?
My husband and I travel a lot for work. And we love antique shops. I try to bring home at least one old photo from every trip. However, I can only research a corresponding pedigree if a name is on the photo. Important for me are specialized websites for genealogy research. Many families also are recorded in newspaper archives and census documents.

Do you see yourself as a benefactor or as a detective?
Definitely as a private investigator! I just want to experience everything that can be found out about a person.

Do you remember a research that has been particularly memorable?
Yes, I found one of my favorite photos in a thrift shop in upstate New York - a photo from 1895 of a charming young man named James Carroll. At first, I only bought it because it was such a beautiful portrait that I'd like to keep forever. But when I discovered Carroll's name on the back, it was clear that I must start looking for his family. I researched and found out, for example, that his father was a physician who was instrumental in fighting the spread of yellow fever. In the end, I found his family on the internet, and returned the photograph to them.

How do members respond when they contact you?
Often they write letters to me, sometimes they also attach a check to compensate me for my efforts. But the real reward for me is the sincere words of thanks - or, for example, reports about how much the person on the photo resembles a living family member.

How well do you know your own family history?
Pretty good. My father has roots in French and Canadian, from which I descend from eleven "Filles du Roi" - young European women whose emigration to North America was financed in the 17th century by the French King Louis XIV. On the maternal side, I descend from family of Pocahontas and William the Conqueror. 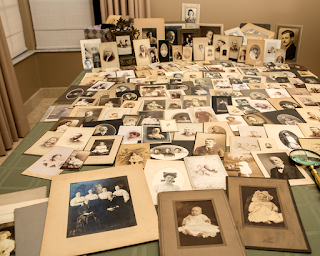 Part of the photograph collection 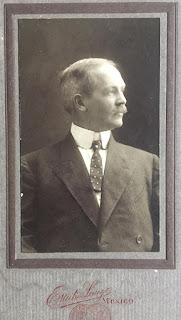 
I do not have this photo. It is in the possession of Erin Pittman who emailed the digital copy to me, so I could do the research necessary to determine if there are any existing family who might wish to have the photo. 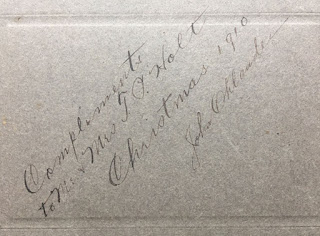 What is known about John Ohlander is that he was a friend of Erin's gr-gr-grandfather, Taylor Holt. The photo was among Holt's personal effects, which Erin is now sifting through.

Taylor Holt appeared to have become acquainted with Ohlander when the two worked in Mexico for the American Mining company in the first decade of the 1900s.

John Ohlander was born in Sweden May 18, 1860 and immigrated in Sept 1888. He became a naturalized citizen of the United States on 12 Oct 1896. He lived in Chicago and Minneapolis. On paperwork to go abroad in 1900, he states that he is single and lists an emergency contact person as his brother Sven Ohlander, Winona Street, Chicago ILL.

Died in Manhattan NY 9 Sep 1929. I do not find evidence that he ever married or had offspring. In order to find some family for this photograph, I will have to rely on his brother Sven.

Posted by Kathleen at 8:44 PM No comments: 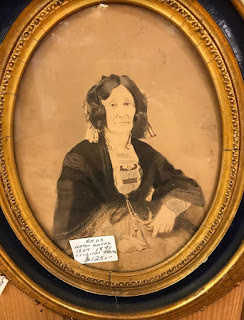 
Here is an old photo which I did not purchase. This photo was found at the Stone Soup Antiques Gallery in Ballston Spa, NY, and is a lovely portrait of "Helen Gates", but without disassembling the frame, there is no way to know what location might be associated with this woman.

The asking price was $125, so it was quite a ways out of my budget. But just in case someone out there is researching the Gates family … I will post the photo I took along with the information given on the price tag.

My best guess for a time period is circa 1870. The fashions appear to be post Civil War, but not by much.

I am not finding Helen Gates with those dates (1807-1890) on either Ancestry.com or Findagrave.com but will check a few other resources and report back here. 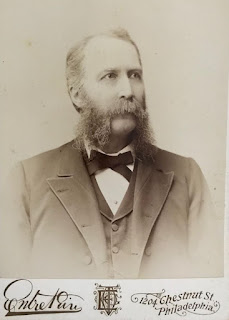 This photograph was found at the Glenwood Manor Antiques in Queensbury NY, yesterday. Ancestry.com has lots of source material for Amos and his family.

NOTE - The servant enumerated on the 1880 Census, Martha Ann Mayberry, is actually a niece of Amos, being a daughter of Amos' sister Catherine. 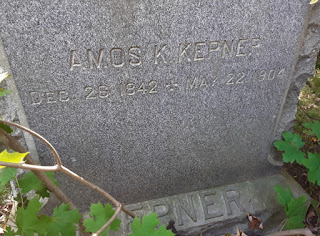 According to Findagrave.com , Amos K Kepner was born 26 Dec 1842, and died 22 May 1904. He is buried at North Greenwich Congregational Church Cemetery. (The headstone at right was found and photographed by Find-a-grave volunteer Pat Larrabee). 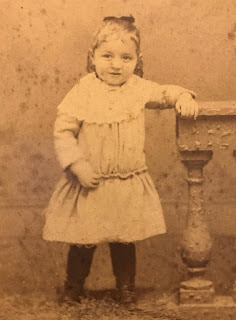 This photo was located this week at Stone Soup Antique Gallery in Ballston Spa, NY, in a booth which contained several photos of families in Vermont.

No year is given on the photo, but it appears to have been taken around 1890.

The photo bears a trademark of "Baker, 406 Main Street, Worcester." No State is mentioned. There are several towns in America named Worcester, including Vermont and Massachusetts. According to Langdonroad.com, a website I often use to pinpoint locations of turn of the century photographers, there was a studio called "Baker & Knight" located at 406 Main Street, Worcester, Massachusetts. 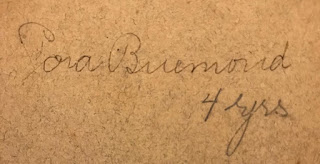 The inscription on the back clearly says "Cora" but the surname is less obvious. It looks like either Buemond, Burmond, Briemond, or Brumond. She is identified as being 4 years old at the time.

The first record I found on Ancestry.com about this Cora Buemond was a Vermont Death Record.  It shows that she was born 17 June 1885 in Paxton, Mass. (a town about 8 miles NW of Worcester, Mass). So I think I am on the right track, and that this is the girl in the photo.

This Cora May Buemond died May 25, 1957 at age 71, in the town of Saxton's River, VT. (I bought other photos from the same booth that day, one of which was taken at a studio in Saxton's River.) She lived most of her life in nearby Rockingham VT. Her parents are reported as Henry Alonzo Buemond and Lilla L. Simonds, both of whom were born in Rockingham Vermont. Her husband was David Nelson Stearns (1882-1978, son of Henry Aaron Stearns and Ann B. Dartt).

(Please see also recent post on ALDRICH family as the mother in those photos has maiden name of Dartt.) 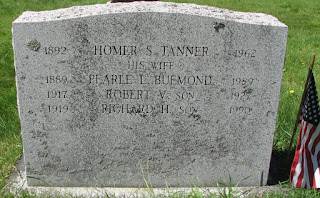 The headstone for sister Pearl (or Pearle) clarifies the spelling of the surname as BUEMOND. Pearl married Homer Tanner and lived to be either 99 or 100 years old.

The 1930 Census shows the following changes:
The family now lives in Saxton's River VT. Husband David is now a retail merchant. Sons Norman (22) and Gardner (19) both live at home and work in a gear factory. Also at home are daughters Faith (16) and Ellen (11).

The 1940 Census adds a great deal of useful information. It appears that the Great Depression of the 30's drove a couple of the adult children back home to live with David and Cora. 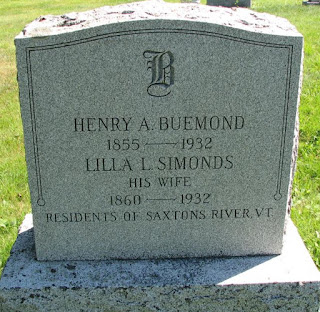 This obit for Henry Buemond was found in the Springfield Republican (Mass) Newspaper, Monday Feb 29, 1932.

UPDATE - These two photos of the ALDRICH family have been claimed by a relative and are going home!

I acquired these two photos yesterday at the Stone Soup Antiques Gallery in Ballston Spa, NY. Although not dated, I suspect the photos were taken around 1900. Clearly they were taken at the same studio, probably on the same date.

There is no indication of location, but the photos were found in a basket that included several from the state of Vermont, so it is possible these are from that area too. It is at least a good place to start.

At Ancestry.com, I entered all the information I knew for certain, which was basically the couple's names.

The first thing that comes up is the 1900 Census for Bethel, Vermont, in which we find the family of John E. Aldrich, his wife Rose and their three sons.


Vermont Vital Records shows a marriage record for John E. Aldrich and Rosa Arvilla Dartt (daughter of Alba Dartt and Hattie Hough or Howe) on Februay 3, 1889. (He is said to be 34 years old, but that does not seem correct if the 1900 Census is correct.) It is his first marriage. His father's name is William, and his mother's name is given as Sarah. Other records say John's mother is Mary Masterson.


Also found is a record in Vermont Death Records for second son Roy Ernest ALDRICH (born 21 Jan 1893). He died at age 29 of bronchial pneumonia brought on by "La Grippe" (Spanish Flu) on 6 Apr 1922. He was unmarried at the time and working as a farmer.

In January 1945, eldest son William Alba ALDRICH at age 55, married for the second time, to Mildred Phillips Avery in Brattleboro VT. He is a woodworker.

In May 1958, William A. ALDRICH married for the third time to Ethel Prouty in Brattleboro.

Posted by Kathleen at 8:14 PM No comments: 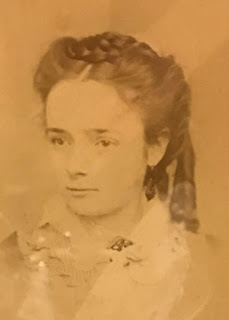 
This photograph of Charlotte Westervelt was found at the Stone Soup Antique Gallery in Ballston Spa, NY yesterday, in one of the first two or three booths. It is framed, behind glass, but was too expensive for me to purchase it. So I snapped this image to use on the blog.

There is this Charlotte E. Westervelt who was born between 1870 and 1875 (based on age given in various Census records).

Daughter Mildred E. Westervelt married 24 Sep 1927 in Schenectady to Wilson J. Becker, asst foreman at a refrigerator factory. Mildred died October 1984 in Schenectady.
Posted by Kathleen at 7:21 AM No comments: