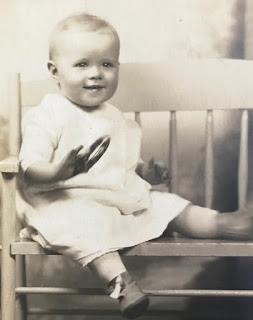 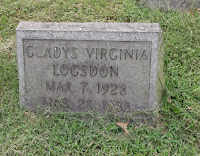 Gladys died March 28, 1933, having just passed her 5th birthday. Cause of death was peritonitis following surgery for appendicitis. 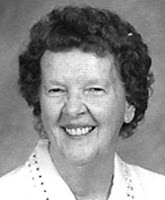 Edith never married and had no offspring. She may have been the owner of this photo. With no one to bequeath this family heirloom to, it would have understandably gone into an estate sale and been dispersed to locations unknown.

That will make it a bit more difficult to find a living relative, but I do enjoy a challenge. 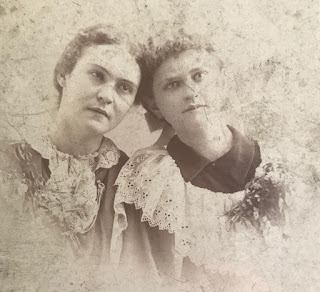 
This photo of two young friends was taken around 1897 at a studio called "Miller & Wickerson" (or maybe Nickerson), Scenery Hill, Pennsylvania. The photo is a bit worn and scratched, and has likely kicked around in one box after another since the death of both subjects. Neither girl had any offspring, so no descendants exist to claim this photo, but I hope to find living relatives who'd like to give a permanent home to this lovely souvenir of a friendship.

We can assume that Frances Weaver never married, since she is buried at age 61 under her maiden name, at the Scenery Hill Cemetery.

Her husband worked as a mortician. After he passed in 1933, Lulu worked as a cook in a Beallsville restaurant.

Posted by Kathleen at 6:17 PM No comments:


This photo does not bear a year, but the lovely fashion worn by this woman indicates a time of between 1910 and 1912.

On 11 June 1913, Hilda married George Edwin Ogilvie, who immigrated from Scotland as a boy. He grew up in Jeanette, PA. In 1913, he was working as a Mechanical Engineer in Springfield Massachusetts. This photo of him (at right) as a star on his school's track team was taken in 1908.


George Edwin Ogilvie Jr. is missing from the 1930 census. He should be about 13 years old, so his absence is disconcerting. A bit of research finds that George Jr. died in 1929 at age 13. I have not yet found the reason. 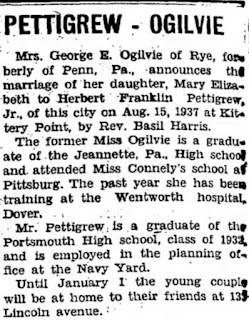 Hilda's Obituary from the Portsmouth Herald (30 Jan 1950). She died in Rye NH, which is a southern suburb of Portsmouth. She is buried in Brush Creek Cemetery in Irwin, Westmoreland County, Pennsylvania, next to her husband and son. 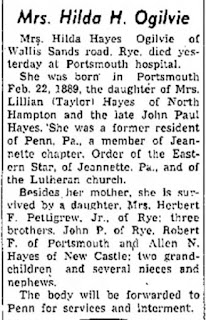 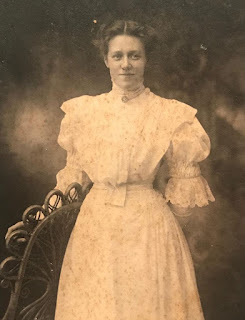 UPDATE - This photo has been claimed by Leith's great-great-granddaughter, and has gone home. 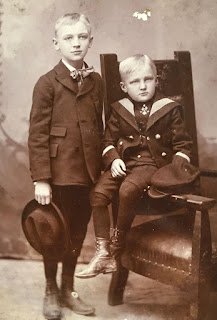 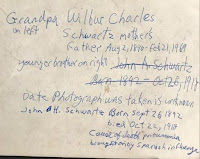 Mother Mary Feldman (1866-1936) is a daughter of German immigrants Carl and Mary Feldman. According to her obituary (Edwardsville Intelligencer, Edwardsville, Madison County, Illinois, Monday, August 24, 1936, page 1), She died of a heart attack in her home in Edwardsville Aug 22, 1936.

US Social Security Death Index shows the birthdate for Wilbur as August 2, 1889 and death is Feb 1969.

The 1920 Census for St. Louis MO, shows Wilbur Schwartz in a Lawyer in that city. 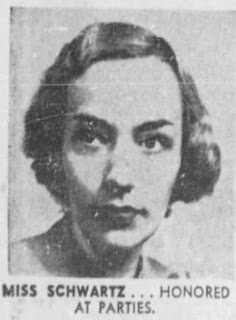 I see no evidence of any other grandchildren, so it was this grandson who wrote the information on the back of this photo. He lived in Boca Raton Florida, and his fairly recent death in 2016 explains why this photo showed up in an antique shop in a neighboring community.

Ruth Mary Schwartz (photo at right), from the St. Louis Dispatch May 1955, on the occassion of her engagement to a man named Murphy. I don't know how long that marriage lasted, or if it even actually happened, but in Mar 1963 she married Vaughn. The newspaper article in 1963 refers to her as "Miss Ruth Mary Schwartz" with no mention of a previous marriage.

Ruth passed away 30 Nov 1983 in Boca Raton, Florida, which is where I will begin looking for Wilbur Schwartz's descendants.

Wilbur's younger brother John Henry Schwartz died in 1918 of influenza while a member of the Chemical Warfare Service in Cleveland OH during WWI. 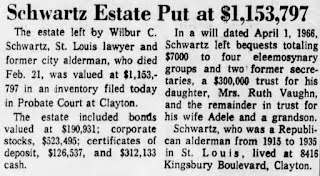 Upon his death, to cancer, at age 79 in 1969, Wilbur Charles Schwartz's estate was valued at more than a million dollars.