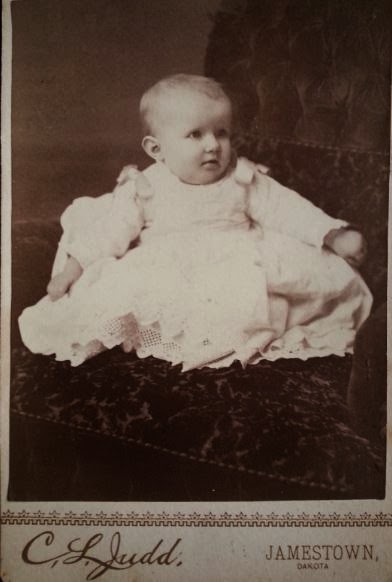 This photo of Deborah Katherine LYMAN was found yesterday at Yeager's Antiques in Midway, Kentucky. The photo was taken at C.L. Judd studio in Jamestown, Dakota. The back of the photo indicates that Deborah Katie Lyman is 6 months old.

So who was Deborah K. Lyman? A visit to Ancestry.com unearthed a good deal of information about her.

Deborah was born 15 March 1888 in Jamestown, Stutsman County in what is now North Dakota but at that time was Dakota Territory. Her parents were George Edward Lyman and Martha "Mattie" A. Hill. She was the eldest of two sisters, the other being Nellie.

The 1910 Jamestown ND Census indicates that George was 54 (born abt 1856 in Illinois) and Martha was 44 (born abt 1866 in Indiana.) Deborah at that time is 22 and employed as a stenographer at the local Court House. Her father is a local merchant. Sister Nellie is 16 years old.

By the time of the 1920 Census, George has passed away and only Martha and Deborah remain in the household. Martha's status is "widow". Deborah, still single at 31, is an assistant secretary in a Real Estate office. Further searching finds that George died in August 1915 at Pingree ND, which is about 20 miles north of Jamestown, and may have been where the family actually lived. His parents were William Baldwin Lyman and Deborah Kelly Tinney, thus "our" Deborah was named for her paternal grandmother.

By the time of the 1930 Census, Deborah and her mother have relocated to Los Angeles, California. Deborah is single and working as a clerk in a bank.

In 1936, Deborah goes abroad to Europe. This is known because on July 29, 1936 she arrives in New York aboard the ship "Champlain" which had originated in Southampton, England. She gives her birthplace as Pingree, North Dakota and her current address as 1282 So. Plymouth Blvd, Los Angeles.

Her mother Martha died in 1942 in Los Angeles. 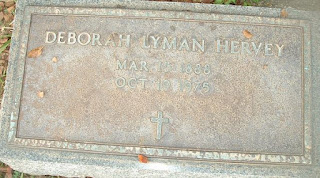 Deborah did eventually marry. On October 6, 1951, at the age of 63, she married retired lawyer, superior court judge, bank president and Freemason William Rhodes Hervey (age 81) in Los Angeles. William Rhodes Hervey was a brother of WWII General Harcourt Hervey. William died two years later and he is described fully at this link: http://freepages.genealogy.rootsweb.ancestry.com/~hervey/HFAV6.htm .  Freemason records state that William's second marriage was to "Miss Deborah Lyman, who was his office and confidential associate." 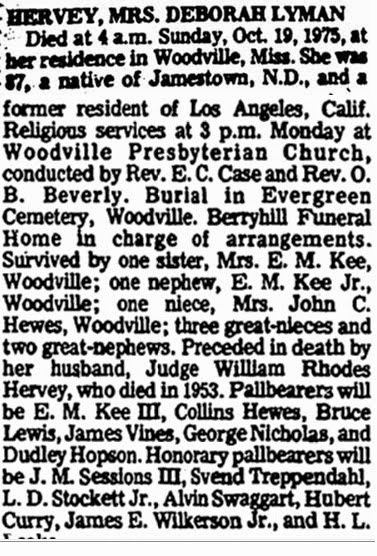 There is a death record for a Deborah Hervey, born Mar 15, 1888, who died  October 1975 in Woodville Missisippi. A friend found this obituary for her.

Posted by Kathleen at 5:39 PM No comments: