UPDATE - G.A. Whitney has been claimed by a great grandson, and is going home!

This photo of Gustavus Adolphus WHITNEY was found at an Antique and Art Show in Stuart Florida yesterday.  The matte bears a studio stamp which says "Marratt, 131,133 and 135 Woodward Ave, Detroit, Mich." 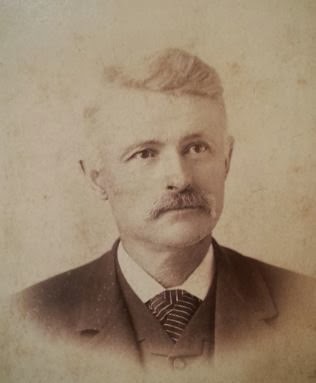 The back is inscribed:

Then there is additional writing at the bottom, which appears to say "1 col stereo scene for Tuesday."

This has the appearance of having been loaned to a newspaper or other publication for the purpose of an obituary article.

In the archives at the Detroit Free-Press, the following Funeral Notice insert was located:

The 1880 Detroit census shows G Whitney (53) living at 162 Cass Street with his wife Adelaide (37) and children Flora (17), Allie (16), Frank (14) and Bertha (8). Gustavus' occupation is "painter" and he was born in Maine. Adelaide was born in New York, but neither of them know where their parents were born. Son Frank works as a clerk in a shop. There are two boarders also living with the family; Samie Andrews (30) who works as a store clerk, and Byron Frick (or Frink) (32), an advertising agent.

The 1903 Detroit City Directory shows him at 54 W. Baltimore Avenue, with a business called "Whitney & Smith" and his partner was Albert O. Smith.  The 1905 Directory lists Adelaide as the widow of Gustavus. In that same Directory, Frank J. Whitney is given as the president of Whitney Furniture Manufacturing. Not sure if this is the same Frank Whitney who is the son of Gustavus.

The owner of the photo at that time, Louis H. Jarvis (born in Canada), was the husband of Gustavus' daughter Flora. In the 1911 City Directory for Detroit, there was a Louis H. Jarvis living at 1401 2nd Avenue. In other years' directories, he is given as a grocer.

This group of FRANZEN and VAN HEUFELN family members have gone home!

This next group was all found in the same box at an Antique Show. I got the distinct impression that the same hand wrote the notes on the back of all of these images, so I bought them all to keep them together. Furthermore, all of the photos were taken in the same region of Nebraska.  I was thrilled later to discover that all of those photos purchased at the show that day were related to each other.

The first group are labeled as the daughters of HEIE FRANZEN.


Heie Franzen was a brother of Ubbo "Otto" Franzen (see previous post). And Heie and Otto were half-brothers to Herman and Edward Van Heufeln (see below.) 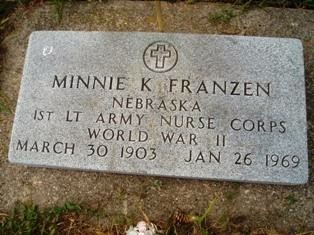 "Mini Franzen" was apparently incorrectly spelled on the photo. Her name according to her headstone was "Minnie". She was a nurse for the Army during World War II. She is buried at the Zion Lutheran Cemetery in Leigh, Nebraska, where many of this family lived.

The next group bears the surname VAN HEUFELN.

The photo of Herman and Louise bears a studio stamp which I cannot read, but I am able to make out the location as Humphrey, Nebraska.  Herman was a brother of Edward Van Heufeln.

I also found this page which has an excellent history of this family:  http://freepages.genealogy.rootsweb.ancestry.com/~sherri/historyf.html

And this obituary on Zeide Van Heufeln offers more information on this family:
http://www.findagrave.com/cgi-bin/fg.cgi?page=gr&GRid=30732879

Posted by Kathleen at 6:48 PM No comments:

Here we have two Confirmation photos of siblings Art FRANZEN and Elaine FRANZEN. The matte is missing on the photo of Art, but for Elaine, it is stamped "Daniel, Columbus." This turned out to be Columbus Nebraska. Time period for Elaine appears to be early 1930s, and the photo of Art looks much earlier.

The back of Art's photo says "Art Franzen, Otto's son."

Using these clues, I have determined that "Art" is Arthur Louis Franzen (1908 - 1963) who married Elsie Ann Becher and had at least two sons. His parents are Ubbo "Otto" Louis Franzen, a German immigrant, and Helene Daniels, a Nebraska-born daughter of German immigrants.

Elaine (1918 - 2006) married Clarence Hellbusch in 1936, and had 2 daughters. She and Clarence farmed in rural Nebraska and returned to Columbus upon retirement. She enjoyed watching sports on television and was a Cubs fan.

At Ancestry.com, I was able to locate a more recent photo of Elaine, and a full obituary which I will not reprint here because this was a fairly recent passing and the obituary contains names of living people and I prefer to respect their privacy. I will however post the recent photo next to that of the old photo, for the purpose of comparison. 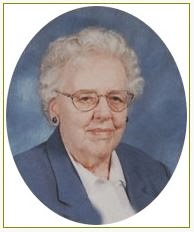 Posted by Kathleen at 4:26 PM No comments:


This photo was taken at the photographic studio of "Chandler, St Albans, VT".  The back is inscribed "Fredrick Carleton Renaud, age 4 months, Nov 16, 1909."

The child was therefore born in or near Mid-July 1909.

Father Fredrick G. is listed as a Barber and runs his own shop, while his brother Eliot, also a barber, helps out in the shop. Melinda is given as a machine operator in a clothing factory.

The full name of the baby's father was Fredrick Guiesbert Renaud.

By the time Carleton was 10, the family had relocated to Southbridge Massachusetts.

In the 1930 Census for that town, the father is still employed as a barber, while 20-yr-old  F. Carleton is a prescription clerk in a drug store. In 1937, he married Lillia B. (Pinsonneault) also of Southbridge and she outlived him by 17 years.

In the 1950s Carleton is found in the City Directory for North Adams, Massachusets, employed as a Chef at St Anthony Hall at Williams College. Eventually the couple moved back to Southbridge. It is unknown whether or not Carleton and Lillia had children.

Posted by Kathleen at 1:46 PM No comments:

UPDATE - The Cole siblings have been claimed by a relative and are going home! This snapshot was found in the same West Palm Beach Florida Antique Show where most of the recent posts were found. I am guessing on the time period (around 1924) based upon the clothing and the automobile parked at the curb. The people appear to be in their sixties, so would be born in the 1860s and thereabouts.

The note was obviously written by the offspring of one of these people, and my guess goes to some child of Frank. The reason I think that, is that there is no "ditto" mark before the name Frank. All of the other names bear some relationship title in front of the name, ie. Aunt or Uncle. I think the "ditto" mark was purposely omitted in front of Frank because he is the father of the person labeling the photo.

I noted the death date for older brother Robert (died 1924), and then examined the photograph a bit more carefully and found that this group of siblings appear to be standing in front of a church; a stained glass window is visible over the right shoulder of "Uncle Will." I wonder if this gathering of siblings was on the occassion of Robert's funeral? They are all wearing dark clothes.

Franklin married Laura Malone and they had a son Ralph (1898 - 1975) whom I suspect held the pencil that wrote the names of the subjects on the back of this snapshot.
Posted by Kathleen at 8:25 AM 1 comment:

The 1900 Census records for Connecticut, show that there is a Clara M PETERSON living in New Britain, Connecticut (which is about 20 miles from Waterbury.) That record indicates that she is born February 1890, so if that is the same person, then she is nearly 21 years old in this photo, in 1910. I am not sure if that is the right person. The woman in this photograph looks younger that 21 to me. I would guess between 15 and 17.

The 1910 Census for Naugatuck, Connecticut (about 5 miles from downtown Waterbury) shows a 16 year old Clara P. MANN living with her parents Albert Mann and Sarah Mann, and her grandmother Maria Mann. Albert was 46 years old and working as a foreman at a woolen mill.  This Clara Mann married Carl Edward Peterson in 1929. She died in 1964 and is buried in the Swedish cemetery in Portland, Middlesex county, Massachusetts.


UPDATE - The Rumsey Family photo has been claimed by a relative and is going back home. This photo was located at the Antique Show which was held at the South Florida Fairgrounds yesterday.  The front of the photo is stamped "R.L. Bartlett, Shrewsbury."


The back of the photo is inscribed "Walter and Fannie Rumsey, dau. Florence (age 17), son Reginald (age 18)."

For quite a while today I was getting frustrated that I could not find the Rumsey family in census records for Shrewsbury, Massachusetts, as I had assumed that was the Shrewsbury indicated by the photographer's studio stamp. Only when I started looking at other Shrewsburys did the right family come into focus.

Eventually I was able to determine that the photo was taken circa 1907 or 1908, in Shrewsbury, Shropshire County, in the west of England, near the border with Wales.

The mother is Sarah Fanny Harris. 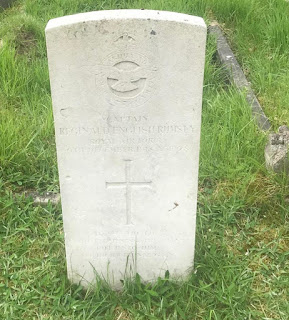 The son is Reginald English Rumsey (1890 - 1918) who would marry Gladys Louise Gardner in 1915. Their life together was destined to be a very short one. He joined the 10th Service Battalion Welsh Regiment and served as a Lieutenant before transferring to the RAF in which he achieved the rank of Captain. He died on 9th Dec 1918 at the Halsar Hospital in Gosport, Hampshire from burns and other injuries when his plane crashed. His obituary in the Royal Aeronautical Society magazine also states he 'Carried out some brilliant observation work over the German lines'. He is buried in Shrewsbury General cemetery and was awarded the 1914/15 Star, British War & Victory Medals. In his will, he left his wife £349.

Thank you, Kevin Barnes, for this photo (right) of the gravestone for Reginald Rumsey.

Sharon Donaldson of the Roundhay St. John Church in Roundhay Leeds England sent this photo of a memorial at the church which includes the name of Reginald Rumsey. It is always a treat to be able to collaborate with other researchers when investigating the details of the lives of the people in these photos. 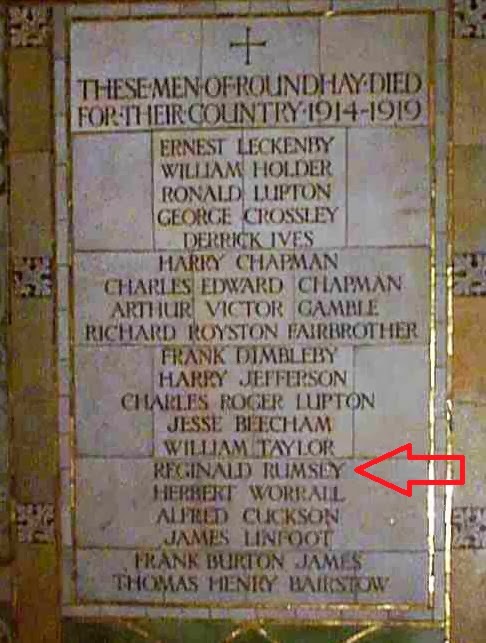