UPDATE - Mark and Priscilla have been claimed and are going home to a relative. These 2 individual portraits of Mark Hughes and Priscilla Hughes were located this past weekend at the monthly Antiques Show at the Palm Beach County Fairgrounds in Florida. Each photo is in a paper folder with a protective tissue sheet in front of the photo.

The photographic studio where the subjects sat was the William Gilbert studio in Philadelphia, PA.  My best guess as to the time period would be circa 1900-1910.  I have seen this same photographer's mark before, for instance - on the photograph of Samuel and Sarah Allen, who lived in the same region, in the same time period.

The Hughes were Quakers and farmers, living in West Grove, Chester County, Pennsylvania. 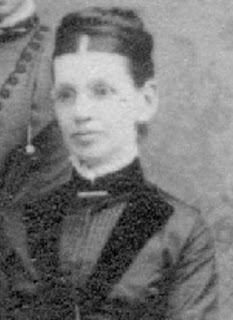 At Ancestry.com, I located a family tree which had many excellent details about this couple, including a photograph of a younger Priscilla Hughes. (I include that photo here for comparison. I do not own this photo at right.) This serves as verification that I have correctly identified the couple in the photos I found this weekend.

The couple had three daughters:

Mark and Priscilla are buried at West Grove Friends Cemetery.

A relative of Mark and Priscilla contacted me as added the following information:

"Mark Hughes attended Westtown Boarding School, and his wife was a superintendent there. He was a rose grower with Dingee and Conard. He was an enthusiastic Guernsey cow breeder and progressive farmer. Priscilla is described as 'patient and kindly', an elder in her Quaker meeting, and a teacher like her daughter. "