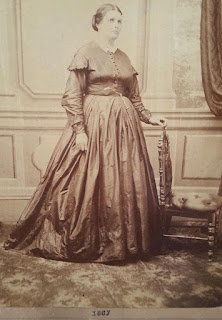 UPDATE - Mary has been claimed by a relative and is going home! This photo was located at an antique fair at the Boone County Fairgrounds, Burlington, KY in November 2015.

Following the death of Jacob Renaker in 1873, she married a man with surname Berry.

I have not been able to determine if Mary (with any of her husbands) produced any offspring.

1860 Census shows Jacob Renaker is a 59-yr-old Farmer with a personal estate valued at $26,000. He lives with his wife Mary Renaker (37) in Cynthiana. Also in the house are Sarah Renaker (20), John Lake Renaker (8) and a farm hand living with them named John Steel (20) which I think might be a child of Mary's first marriage. He would have been born around 1840, the year after Mary Beaseman was married to John W. Steele.

1870 Census shows Jacob Renaker is a 69-year-old Retired Farmer living in Cynthiana with his wife Mary O. Renaker. His real estate  property is valued at $25,000.

Posted by Kathleen at 3:59 PM No comments:

This photograph of "Gray Wittmeyer" was found today in the Antique Peddlars mall in Springfield, Oregon.

His father was John Wittmeyer, and his mother Sarah Rose Irwin.

The following obituary was found online.

Gray was born Sept. 12, 1915, in Denver, Colo., to John and Sallie Wittmeyer. Gray grew up and attended school in Denver, where he was the salutatorian of his high school class receiving a scholarship to attend college. He completed his graduate work at the University of Denver.

As a young man, Gray worked at a saw mill and delved into mining, later joining the U.S. Army Air Corps. While serving in the Air Corps, he was stationed in Canada and served during the building of the Canadian Highway. It was during this time he met the family of his future wife, Dorothy Andrew, who encouraged him to write to her after he returned to the states. After a long correspondence they met in person and eventually married.

Gray worked as a forester for the Bureau of Land Management, specializing in reforestation. He supervised the replanting of a large part of the forests in the Reedsport and Drain area, while recording his extensive tree seed research. For more than 40 years, he worked with elementary students, patiently teaching them the art of tree planting.

Gray will always be remembered for the pleasure that he took in engaging others in stimulating political discussion. He was passionate about justice and truth, and the New York Yankees, but first and foremost he was a kind gentleman. Everyone who was privileged to know Gray all agree that our world has lost an extraordinary soul.

He is survived by his loving wife of 55 years, Dorothy Andrew.

Gray was preceded in death by his parents and his brother, Rodney.