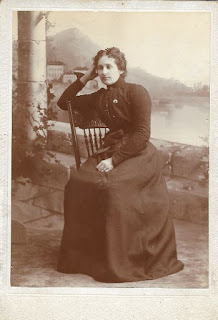 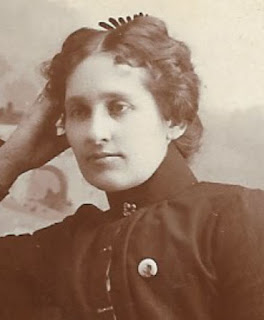 I believe this is Mary "Mollie" McDonald-Judge (born 4 June 1855 in Ontario Canada to parents Peter McDonald and Jane Pinkham), wife of James Judge proprietor of the Palace Hotel in Ketchum Idaho. They were married 20 Jun 1872 at Ada Idaho. 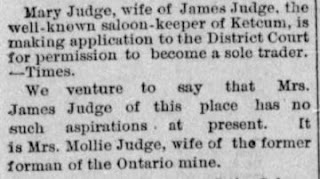 (Note - there is a column for number of children born/living, and for Mollie it said 1 child born, 1 child living. This is disconcerting. It is either an error, or I have the person identified.)

James died in 1910 while a resident of the State Asylum.


Mollie died 2 March 1931 in Caldwell Idaho (Canyon County). On the death certificate, the informant was Mrs. Viola Price (matron of the I.O.O.F. Home in which Mollie was tenant at the time). 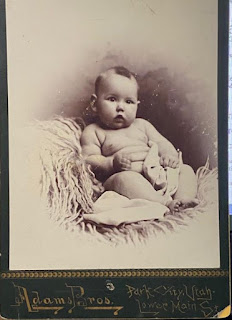 Lots of clues there! I find that in the Carey Pioneer Cemetery (Carey, ID) there are two children of John P. Judge (1866-1920, son of James Judge and Mary Golding), which both died in 1895. These are Nora Irene Judge (age 1 or 2) and her brother Edmund Percival Judge (age 3).

This tells me that Viola Judge also died in 1895.

This death notice for Charles Judge was located in the Bend Bulletin, 25 June 1917. 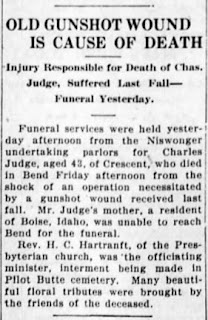 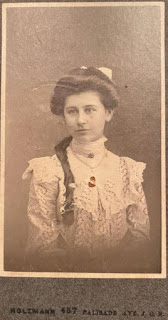 UPDATE - This photo has been claimed by Mabel's family and had gone home!

Although the back of the photo bears the identification "Mabel Seegar", I believe this could also be a misspelling of Mabel SEEGER, whom I find living about 35 miles away in Rockland County NY at this time.

I still need to determine whether or not a girl of this age and name might have been living in the Jersey City area at this time.

Still working on this one.