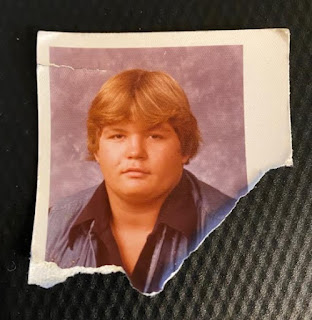 (CLAIMED. Uncle Jerry is going home.)  This photo and post are a little different than most I share on this blog, in several ways. First of all, I did not purchase the photo at an antique store - I found it near the sidewalk while walking my dog. Secondly, it is now labeled as to who the subject is. Thirdly, it is relatively new (compared to most I research) and is damaged.

As most of you know, several towns in western Kentucky suffered incredible damage on 10 Dec 2021 as a cluster of rare December tornadoes touched down in the middle of the night, taking lives and livelihoods and scattering personal possessions far and wide.

During my daily dog-walk on the following day or two, I found the above photograph nestled in the lawn of a neighbor's property, near the edge of the sidewalk, so I picked it up to examine it. It appeared to be a high school photograph of a young man of high school age. His hairstyle and clothes make me think it was taken in the latter 1970s through possible mid 1980s. The lapels of his shirt are rather long, as was seen in that time range. His hair is feathered to both sides.

My first thought was that this item was either accidentally run over by a lawnmower or had been assaulted by one of the tornadoes of the previous few days and blown a hundred or so miles from its original location. 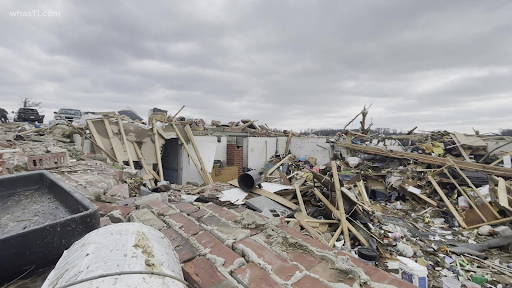 With no name to research, I decided on a hunch to see if anyone had created a FaceBook group for posting such items found, and sure enough there was a page for just this purpose. It is called the "Quad State Tornado Found Items" and can be found at this link:

Other people had already posted photographs and most of those bore the same ragged rips and tears as the photo I had found. So I posted the photo and within a couple days someone spied it and recognized the young man as their own "Uncle Jerry" and that it had been in their "mamaw's photo album." I hadn't the heart to ask what had happened to "mamaw's" house, and I could only imagine the terror of the circumstance that brought that photograph from its starting place to my neighborhood in Lexington.

I was given a mailing address in Campbellsville KY of a relative to whom I have just mailed the photo back. The tornado which struck Campbellsville was classified as an EF-3 and was not the same one as the EF-4 which tore through Mayfield and Dawson Springs and monopolized most of the headlines. But the Campbellsville tornado, which destroyed 70 homes, proved just as capable of causing heartbreak.

Campbellsville is about 83 miles from Lexington, as the crow flies, or in this case - as the debris flies. Other posts at the FaceBook group show photos which traveled up to 130 miles, such as the one from Dawson Springs which was found stuck to a car's windshield in New Albany Indiana.

I would like to take a moment to thank whomever had the great idea of using Social Media to quickly get these personal items back to those who lost them.

On a side note - with this post and successful connection to the photograph's owner, I have reached the milestone of 200 photographs returned to family.