ACQUIRED: Among a group of photographs given to me by Carol Kleppinger - these are friends, schoolmates and acquaintances of her grandmother Florence Ream.

Photographer C.D. Tinsley was operating in Corning Iowa from 1901 to 1902. Also, Miss Florence Ream was a student of 14 years of age, known to have resided near Corning from the years 1899-1901, leaving Corning in September of 1901. Florence is presumed to have been a student of Ida Okey, who was a teacher during that time. Therefore the photo of Ida Okey can be safely dated to the year 1901.

I love how the photographer did not cut off the hem of her dress in this image, carefully trimming around it and allowing it to flow out of the oval confine of the mat.

IDA OKEY was born 02-Nov-1871 in Corning Iowa and lived most of her life there. Her parents were Arthur Franklin Okey (a wealthy banker of the town, and son of Jeremiah Okey & Hannah Jane Smith) and Catherine Vernon (a daughter of Jacob Vernon and Catherine Smith). 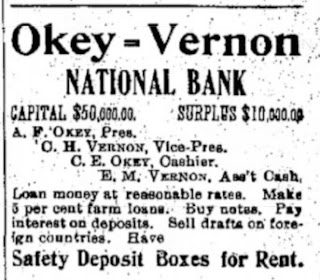 Their seven children are:

Upon her father's death in 1909, Ida inherited 480 acres of land about a mile southwest of Prescott Iowa. He had been ill and lingering near death for many weeks, the toll of which was heavy upon Ida's mother Catherine. A few months later, Ida's mother committed suicide in the attic of her daughter Flora's home in Corning, supposedly due to the mental anguish of her husband's recent death.