UPDATE - Jessie Ankeny has been sent home to her granddaughter!

ACQUIRED: Among a group of photographs given to me by Carol Kleppinger (so I can find homes for them) - these are friends, schoolmates and acquaintances of her grandmother Florence Ream.

Her father was a son of Henry Giese Ankeny and Horatia Fostina Newcomb. Her mother was a daughter of Robert Wing Rogers and Martha Ann Fleharty. 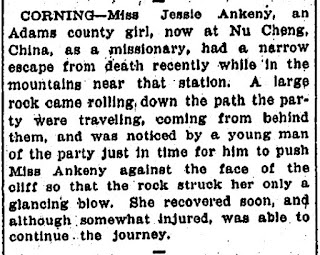 Upon graduation, Jessie became a missionary in China. She met and married Henry Veere Lacy in Foochow (also spelled Fuzhou) where he worked as a hospital administrator.

Husband Henry was a son of William Henry Lacy and Emma Nind.

Their four children were all born in China:

Jessie left China around 1939 and lived thereafter in California. She died 11-Apr-1979. She and her husband Henry are buried at Forest Lawn Memorial Park in Covina California.