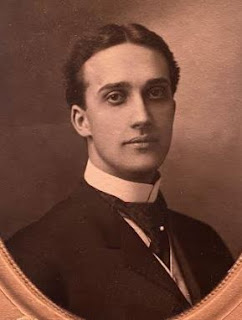 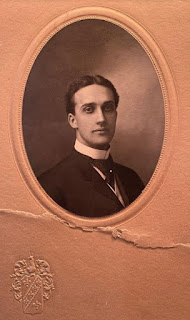 As you can see, the lower third of this photo card is broken, but it's hanging in there.

The photographer's mark appears to say "Midder's" but no location is given. Leslie Putnam attended a number of colleges, and this could have been taken in any of those locations. There were multiple people named "Leslie R. Putnam" but I am certain I have the correct one because this one went to high school in Bedford Iowa, the same school as Florence Ream, in whose possessions these photographs were kept.

One of the most beautiful home nuptial events which have taken place in Morrison in recent years was the wedding of Professor Leslie Ray Putnam of Helena, Mont., and Miss Neva V. Smith, which was solemnized at the residence of the bride's mother on North Base street. The ceremony was performed by Rev. I. E. Putnam of the Albany Park M. E. church of Austin, a brother of the groom, assisted by Rev. W. J. Abel, pastor of the M. E. church in this city. The vows were taken at 8:30 o'clock in the presence of a number of relatives and close friends of the contracting parties. The couple was attended by Miss Veda Maud Smith, sister of the bride and Rev. Charles Putnam, pastor of the Bethel M. E. church of Chicago, a brother of the groom. Mr. Putnam, as well as his bride, is a graduate of the College and Conservatory at Mt. Vernon, Ia., and at the present time he is one of the professors in the Montana Wesleyan University at Helena, having supervision of the music and teaching history. Mrs. Putnam has been elected instructor in the conservatory and will give instruction in voice culture and on the piano. Those from out of town who attended the wedding were; Mr. and Mrs. J. P. Putnam of Bedford, Ia., Rev. I. E. and C. H. Putnam of Chicago, Mr. and Mrs. Orton Chamberlin of Lyndon, Charles, Fred and Edward Stapleton with their wives of Edgely, N. D., Madge Shafer of Port Byron, Hiram Smith of Fulton, Louise Lte of Amboy and Miss Coral Allen of Sterling. [The Sterling Evening Gazette, Sterling IL,  24 Dec 1910 Pg 2]

WWII Draft Registration shows a lot of useful information. His middle name is Ray. He was born 6 May 1885. At that particular time he was employed by Murray State College in Kentucky. 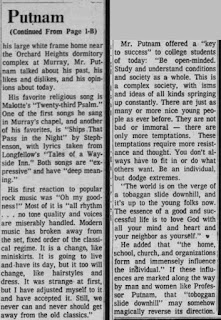 An article in The Paducah Sun 1966, covering a Benefit Concert to be held in nearby Murray KY, had much to reveal on Leslie Putnam's background. In part it said "Born at Bedford Iowa, he earned the BM and BS degree from Cornell College; did graduate work at Northwestern University and Garrett Biblical Institute where he received a music degree. He was awarded the MS degree in education at Kansas State College and studied voice at Chicago Musical College, Lamont School of Music in Denver and was baritone soloist with the Cornell College Choral Society and the Kansas State Choral Society."

There was a music scholarship at Murray College named in his honor.