This photo was found at the Stone Soup Antique Mall in Ballston Spa, New York.  It took a good deal of handwriting analysis and Census browsing to finally decipher the name written on the photo, but there were enough clues to eventually figure it out.

"In Memory of our Junior English class '20."  The signature that I could only make out at first as "Trasir Y. Strirus" became "Tessie N. Stevens" after closely examining the E in "memory" and the N in "Junior" and "English." 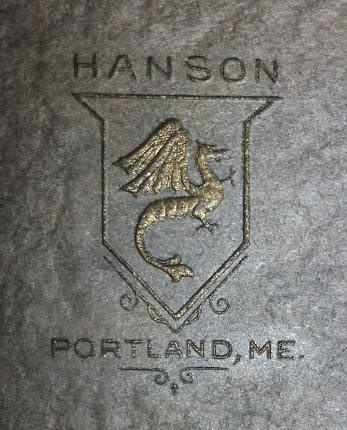 The front cover of the photo bore an emblem (Hanson, Portland Maine) which I first concluded was a High School seal, but I think now was the photographer's mark. There was a "Hanson High School" in nearby Buxton Maine, but the 1920 Census for Buxton did not include any Stevens family with a teenage daughter. Also, it made no sense that the seal would say "Portland" if the school was actually in Buxton, so I abandoned that notion and started scanning the 1920 Census for Portland Maine.

It was there that I found Tessie N. Stevens, aged 16, living with her widowed mother, Josephine, and siblings.

She married Reginald Harold McKee (about 7 years her senior) and had a daughter Jean. By 1935 the family had relocated to Binghamton, Broome County, New York.


Tessie died in 2002 at the age of 99, outliving her husband by nearly 40 years. She is buried beside him in Calvary Cemetery, Johnson City, Broome County, New York.