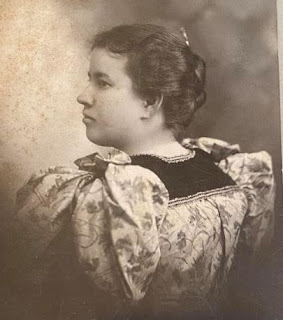 The back of the photo bears the hand-written name, in pencil, "Adelaide McKown (partially erased) Hawke"


I found this lovely little vignette on an Ancestry tree of a young Adelaide McKown around age 10, take around 1877-1878, along with other members of her family. I have included those of her parents as well as the photo of Adelaide for comparison, but not the entire family. (Remember - I do not possess these following images. They are supplied here for informational purposes only.)


January 20, 1902, she married Francis Hawke. I am finding very little on him. He appeared on the 1910 Census in which the couple is living in Tunkhannock with Adelaide's widowed mother. But by the time of the 1920 Census, Adelaide is living alone with her widowed mother Clarinda, no husband or children, although she is described as "married." In 1911 he is reported by the local paper as being engaged in business in Maurer NJ.

Adelaide died 14 July 1952 in Tunkhannock PA. This obituary was carried in the Scranton Tribune 16 July 1952.