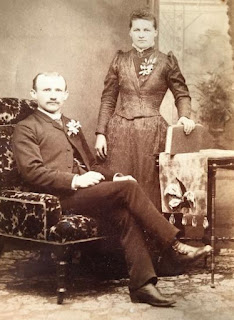 
This portrait of Anna and August Beversdorf was taken probably between 1891 and 1893, based on the fashions and general appearance of the photograph. Both are wearing a corsage, and it is possible this photo was taken on the occassion of their wedding.

The photo at left was found elsewhere online (I do not have that photo) and shows an utterly charming image of the couple's young sons Frank and Walter, circa 1898. I include it here for informational purposes.

The family appears on the 1920 Federal Census, living on New Haven Road in the township of Lenox, which is about 9 miles from Armada, MI.

Her parents were Frederick Godfrey Lempke and Louise Weyer-Lempke.

While researching Anna, I sometimes found her surname spelled Lemke, and sometimes Lempke.  The matter was solved when I found this image online of a younger version of Anna (photo at right). It is inscribed "Anna Lempke, my sister". So I will accept that Lempke is the correct spelling.

Anna and August are buried in the Centennial Cemetery at New Haven Michigan.


I know that August had a brother William, who was married to Anna's sister Matilda. August's father was William Beversdorf (1831-1905). August was the informant for William's Death Certificate. William is listed as "widower" at the time of his death. August's mother's name was Amelia Bubel. She died in 1903. 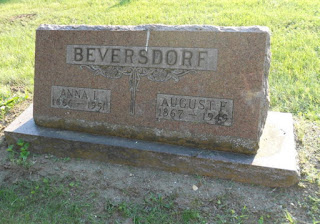 These individual photos of Matie Applebee and Ruby Applebee were located at the Madison-Bouckville Antique Week sale in 2017. I thought at first that the name "Matie" was a misspelling of Mattie, but that was a wrong assumption. The photos were taken in Albany, New York, likely around 1905.

I believe the girls are cousins. Furthermore, the same hand wrote their names on the back of the photographs.

There are only 8 pages that comprise the 1905 New York State Census for the township of Westerlo, Albany County, New York, but both girls are located there. I start first with Matie.

Using Ancestry.com, I was able to determine that Matie and Albert's father was Charles H. Applebee (1853, d. 21 May 1891, age 37) who died when Matie was only 6 years old. Matie's mother is Ida Stanton Hannay (1863-1939, daughter of Ambrose Hannay and Eliza Stanton). Matie in early Census records is shown as "Mary E. Applebee."

From the book "Genealogy of the Hannay Family, by William V, Hannay, Albany 1913" comes the entry at left.

Matie E. Applebee married retail merchant Albert Gibbons in 1912. She died in 1969, having spent her entire life in Westerlo, Albany County. It appears she left no offspring.

Ruby May Applebee, in the 1905 State Census, is 17 years old. Her father is William Wickam Applebee (52, farmer) and her mother is Hattie Cordelia (Stanton) Applebee (49, keeping house).

Ruby's father William is a cousin of Matie's father Charles. William and Charles' respective fathers were brothers.  Also the maternal line of both girls is the Stanton family.