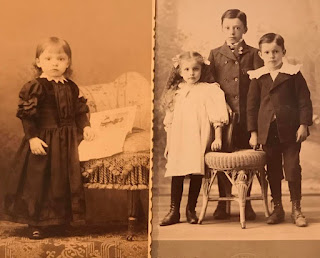 
The inscription on back says "Wayne or Harry Harding" then below that it says "Wayne" with a big checkmark next to it. I take that as confirmation that this is Wayne, and that he has a brother named Harry.

When Wayne was 7, his father Thornton died.

Wayne married Elizabeth Jenkins of Norton VA, in 1911, and died apparently without children in 1918.

This Obituary is from the 24 Oct 1918 edition of the Jeffersonian Democrat (Brookville PA).

The second photo shows the three siblings together. WAYNE is the eldest in this image. JOHN is the younger boy, and ANNE is the young girl. This photo was taken circa 1899 as Anne appears to be about 4 or 5 and Wayne looks to be around 10 or 11. 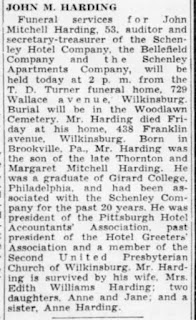 This Obit from 4 Sep 1944 issue of the Pittsburgh Post-Gazette.