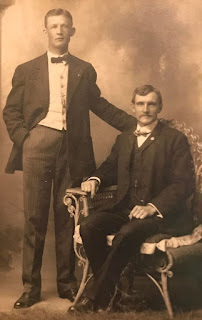 John "Jack" Michael GANGLER was born 27 Feb 1877 to parents Peter Gangler (b. 1841 in Germany or Holland) and Louisa Seiferman.

On the WWI Draft Registration, he lists closest relative as his brother Joseph M. Gangler of Port Angeles WA. Joseph was a banker, and operated The Toggery, a gentleman's clothier, in Port Angeles. He was married to Mary Emaline Shoultes in 1915. They had children:
1916 - Frank Norman Gangler
1919 - Catherine Gangler
1921 - James J. Gangler
1923 - Phillip Gangler

By the time of the 1940 Census, John was retired and living in Plympton, Multnomah County, OR, with his wife Mattie Emily Dennis and niece Irene Hess.

John Ganger died in Dec 14, 1942 and is buried at Lincoln Memorial Park, in Portland Oregon, next to his wife Mattie who died in 1951.

I see no evidence that John Gangler had any descendants of his own.