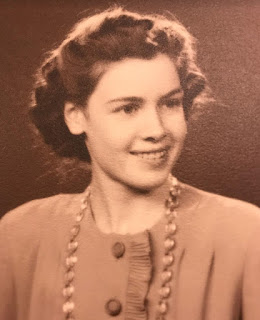 UPDATE - this photo of Virginia Jackson has been claimed by a relative and  is going home.

After some initial research, I find that Virginia was born 12 March, 1927 in Eltowah TN, one of three daughters born to Cooper P. Jackson (1886-1980) and Nina Mae Caldwell-Jackson (1887-1979, a daughter of Dennis Hasking Caldwell and Nancy Catherine Headrick). 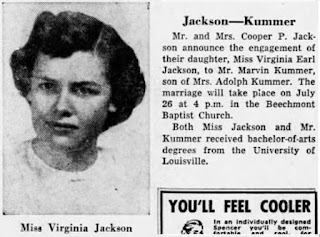 In 1952, Virginia married Marvin Kummer in Louisville. Here is the insert from the Courier-Journal, 22 June, 1952. 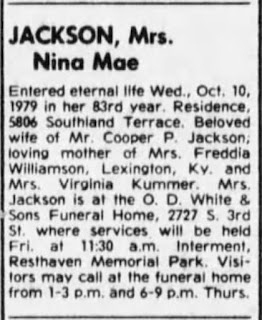 This obituary for (mother) Nina Mae (Caldwell) Jackson was located in the Louisville Courier-Journal, 11 Oct 1979. It mentions relatives including daughters "Mrs Freddia Williamson and Mrs. Virginia Kummer."  I am now reminded that some of the photos I saw in the same box at the antique mall bore the name Freddia, which was unusual enough for me to recall it now, but lacked a surname which is why I did not purchase those at the time.

I also find an obituary for Virginia herself, who passed 23 Feb 2018 in Louisville. Her parents and husband preceded her in death. At that time, her sister Freddie was listed as living. Also mentioned is that Virginia was a graduate of Louisville Girls High School and the University of Louisville. She was employed by Louisville Jefferson County schools and taught English and Humanities for 31 years at Southern High School. She and Marvin enjoyed many vacations together to Switzerland and with Marvin's Navy Reunion groups.

There is no mention of children in the obit. So this photo may end up being difficult to re-home, but will keep researching.
Posted by Kathleen at 2:29 PM