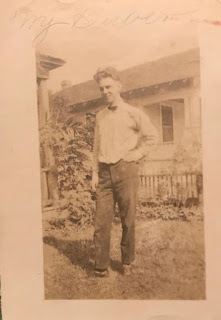 UPDATE - Noah James Bodenhamer has been claimed by a family member and is going home! 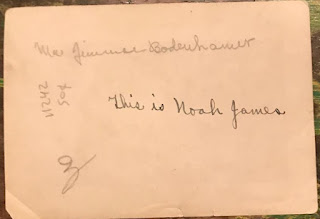 This snapshot appears to have been taken in the mid-1920s, but that is just a guess.

By 1920 the family had relocated to San Antonio Texas.


There was an elder brother who was already out of the house by 1920 and was in fact at medical school in 1920. His name was William BODENHAMER. In 1916, just when he was planning to enter medical school at Michigan Univ, his mother Mary became quite ill and many doctors could not help her. It was eventually a doctor of osteopathy who helped her back to health. So impressed was William that he entered the American School of Osteopathy in Missouri (now named the Kirksville College of Osteopathic Medicine). 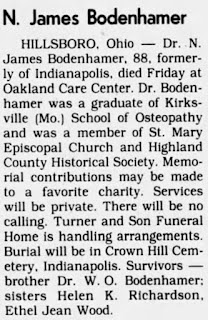 I cannot find any evidence that Noah James ever married or had children who might wish to have this photograph.

This obituary was located in the Indianapolis News, 22 Jan 1991.
Posted by Kathleen at 7:09 PM