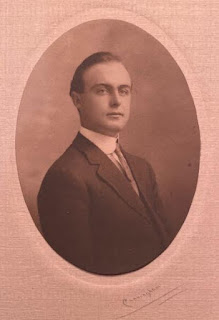 This is the third STACY surname photo acquired at the same time from the same booth at an antique mall. The other two were: JOHN S. STACY and CHARLES P. STACY.

This is LELAND JOHNSON STACY, SR., born 11 Aug 1889 in St Lawrence County, NY. He is the son of George Arthur Stacy (1859-1942) and Minnie Johnson (1865-1923). His father George is a son of William Maurice Stacy, who is an older brother of John S. Stacy and Charles P. Stacy (previously researched). Leland is a great-nephew of John and Charles.

The photo was taken at a studio identified only as "Cunningham", but I believe this was the studio of John Cunningham who operated in Ogdensburg NY, a mere 20 miles north of De Kalb where the Stacy family lived. The fashions worn suggest a time period of between 1911 and 1914, and the sitter appears to be in his early to mid 20s.

Leland would have completed High School around 1908, so this was probably taken during his college years. At age 25 (circa 1914), Leland was working as a Chemistry and Physics teacher at the Ivy League prep school Horace Mann in The Bronx. And in 1917 he is found in the University of Chicago yearbook, and is shown having earned a Fellowship in Physics.

He was a commissioned Lieutenant in WWI.

In midsummer 1919 Leland married Mary Elena Elliott in Missouri. They resided in Essex County NJ and had the following children:

Leland died in Sep 1965 in Norfolk VA and is buried in a family plot in Missouri.