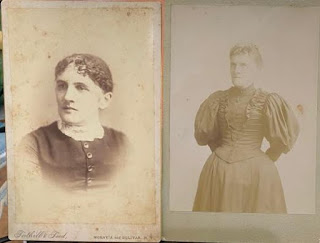 The first photograph was taken at the studio of Tyrus T. Tuthill who resided at and operated a studio in Moravia, Cayuga county, New York from at least 1870 through at least the mid-1890s.

The writing on the back of photo #1 appears to have originally said "Mrs. Phoebe Peacock", but over-writing it is the word "Miss". I wonder if the "Miss" indicates this photo was taken before or around the time of her marriage. 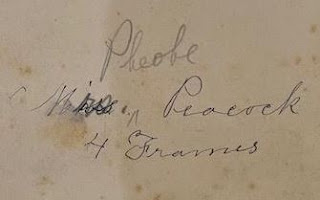 Photo #2 was clearly taken about a decade later. The dress style worn by Phoebe dates to around 1894.

I searched Ancestry.com, Findagrave.com, and others and could only find one Phoebe Peacock in this region. And Peacock was her married name.

Phoebe was married in 1882 to Jesse Peacock.

On both the 1910 and 1920 Federal Census, Jesse and Phoebe are living in Syracuse. Jesse is 58 in 1920, born in NY of English immigrant parents. His occupation is Machinist at a gear factory. Phoebe is 59, born in NY of NY parents, no occupation.

After the death of her husband Jesse in 1933, Phoebe lived in Ossining, Westchester county, NY with her son Clinton Peacock and his family. She is found on the Ossining NY Census 1940 at age 78, widowed. Her son Clinton is a Printer, and his wife Leora is a public school teacher.

Phoebe died 2 Mar 1943 in Cayuga County, and is buried at the Quaker Church Cemetery in Moravia.